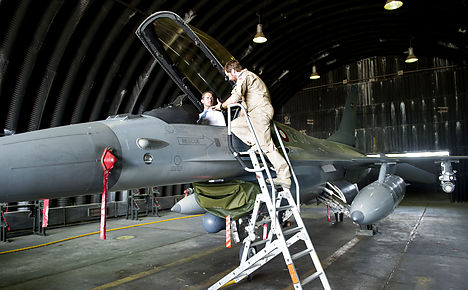 Former Foreign Minister Kristian Jensen sits in one of the fighter jets in Turkey earlier this year. Photo: Heine Pedersen/Scanpix
The end of Danish participation in military operations in Syria was expected, as the deployment of F-16s in June was authorized to last upwards of six months before both the ageing jets and their pilots and mechanics could get a rest.
The seven jets, four of them operational at any one time, have been stationed at Turkey's Incirlik airbase and in addition to seeing combat, they have also been flying surveillance and reconnaissance missions over Syria.
Denmark has also provided the coalition with a C-130J transport aircraft and 400 military personnel, including 60 special forces troops. The transport aircraft would also be withdrawn from the operation, the government said.
“We have decided to withdraw the Danish fighter jets as planned,” newly-named Danish Foreign Minister Anders Samuelsen told journalists after a meeting with parliament's Foreign Policy Committee. “Instead of extending the mission we are sending an additional 20 to 21 troops.”
Defence Minister Claus Hjort Frederiksen said the new troops would bring engineering and construction skills to the operation.
“They will train Iraqi forces in, among other things, de-mining operations and will help our current contribution within training,” he said in a statement.
The decision to bring the jets home comes just three days after the Pentagon announced that a string of miscommunications, intelligence shortcomings and human errors were behind a US-led coalition air strike in Syria in September that reportedly killed around 90 regime forces.
Danish military jets began bombing Islamic State targets within Syria in August after parliament approved expanding Denmark's military efforts in the area. That marked a significant expansion of the country’s role in the international coalition fighting the so-called Islamic State as it had initially contained its military action to northern Iraq.
The Danish fighter jets were part of the massive air strike, which saw a total of 34 guided bombs and hundreds of rounds of high-calibre ammunition blasted at what were believed to be Isis targets.
Although the Danish fighter jets will pull out of Syria, the newly-formed coalition government has committed Denmark to “actively contributing to international military operations and stabilization operations”.