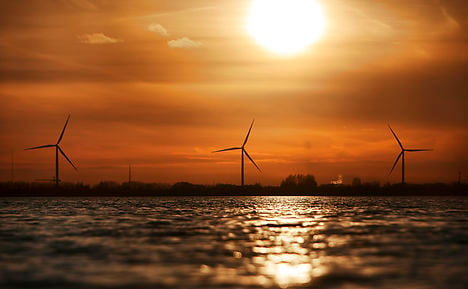 Wind turbines in the Greater Copenhagen area. Photo: Kasper Palsnov/Scanpix
“The EU's 2020 targets on energy and climate are now well within reach,” EEA executive director Hans Bruyninckx said in a statement released with the report.
“But certain trends are alarming, in particular for transport. In that sector, renewable energy use remains insufficient and greenhouse gas emissions are rising again,” he added.
The bloc's 2020 target calls for 20 percent of gross final energy consumption to come from renewable sources, and that number rose to 16.4 percent in 2015 from 16.0 percent in 2014, according to preliminary estimates cited in the report.
Energy consumption and greenhouse gas emissions grew slightly in 2015 but, admittedly, the increase came after “an exceptionally warm winter” the previous year, which led to lower energy demand for heating it said.
The EU was also well on its way to meeting its target of reducing energy consumption by 13 percent compared to 2005 levels. Preliminary data showed that by 2015 consumption was 11 percent lower.
Under the Paris climate deal struck almost a year ago, the bloc plans to make renewable energy account for 27 percent of energy use by 2030, and to cut greenhouse gas emissions by 40 percent compared to 1990 levels.
By 2050, it hopes greenhouse gas emissions will be down by 80 percent.
Meeting the 2030 target for renewable energy would “require additional efforts because regulatory changes affect investors' confidence in renewables, while market barriers persist,” the agency said.
Similarly, the energy efficiency target would need “effective implementation of energy efficiency measures as well as a rapid change in consumer behaviour,” it said.
The EU on Wednesday unveiled “clean energy” plans to boost renewables, cut waste and reduce subsidies for coal power in a bid to meet its commitments under the Paris climate deal.
Binding energy efficiency targets would also be raised by 30 percent by 2030 under the sweeping package of measures from the European Commission.
But environmental groups have accused the bloc of doing too little to end subsidies for carbon-spewing coal power plants, and of undermining investments in renewables.