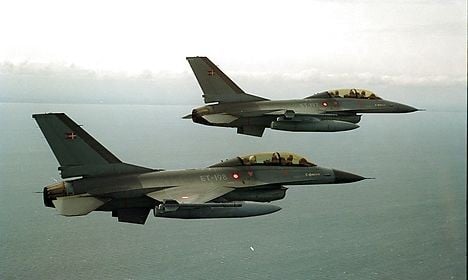 Two Danish F-16s were part of the attack that reportedly struck and killed Syrian military forces. Photo: HENNING BAGGER/Scanpix
American, Australian, British and Danish planes all took part in the massive air strike, which saw a total of 34 guided bombs and hundreds of rounds of high-caliber ammunition blasted at what were believed to be Islamic State targets.
There were “errors in the development of intelligence, as well as missed opportunities for coalition members on duty to recognize and voice contrary evidence to decision makers,” US Central Command (CENTCOM) said.
The statement, which followed a six-week probe, marked the US military's first formal admission of fault into the September 17 attack near Deir Ezzor.
Defence Command Denmark, the command centre for the Danish armed forces, released a short statement following the attack that confirmed that Danish fighter jets were part of the mission. The Danish forces said it was “of course unfortunate if the coalition mistakenly struck anything other than ISIL forces,” using one of the many acronyms for the so-called Islamic State.
The US-led coalition is focused on attacking IS in Syria and Iraq, and is eager to avoid getting involved in Syria's brutal civil war.
Regime officials have accused the coalition of intentionally killing its troops, but CENTCOM stressed the attack was conducted in the “good faith” belief it was targeting IS.
US Air Force Brigadier General Richard Coe, who investigated the case, told reporters the probe had only conclusively counted 15 deaths, but acknowledged the toll was possibly much higher.
The Syrian Observatory for Human Rights monitoring group has said at least 90 regime troops were killed.
The targets struck included “defensive fighting positions” — vehicles, tents, tunnels and people — all of which were thought to be legitimate IS targets, Coe said.
“In this incident, we made an unintentional, regrettable error primarily based on human factors in several areas in the targeting process,” he said.
27-minute delay
An intelligence analyst spotted a tank in the region north of Deir Ezzor's airfield and concluded that the vehicle “can't possibly” belong to IS, Coe said.
But his assessment was overlooked or countered because IS had been able to commandeer a regime tank a few days earlier.
“It was not unreasonable at the time to come to the conclusion that that was an (IS) commandeered asset,” Coe said.
The belief the tank was in IS hands led intel experts to erroneously assume the areas it was operating in and troops it interacted with were all jihadists, a mistake known as “confirmation bias.”
Further complicating matters, the troops being monitored were not wearing recognizable military uniforms or carrying identifying flags, Coe said.
Perhaps most significantly, a critical miscommunication occurred when Russian forces called the coalition to tell them the strike was hitting Syrian regime troops.
That call, which came in on a special hotline between the coalition and the Russians, was subject to a 27-minute delay because the officer with whom the Russians normally spoke was not immediately available.
During that window, almost half of the separate strikes making up the larger assault occurred.
As soon as the Russians spoke to their regular point of contact, the strike was called off.
No coalition forces have been charged in the incident, and the Pentagon has expressed “regret” but not apologized to the Syrian regime.
“In my opinion, these were a number of people all doing their best to do a good job,” Coe said. “The decision to strike these targets was made in accordance with the law of armed conflict and the applicable rules of engagement.”
The strike was conducted by F-16 and FA-18 fighters, A-10 ground-attack craft and drones.
Pentagon spokesman Peter Cook said Defense Secretary Ashton Carter was confident “lessons learned” would be implemented.
“When we fall short of our high standards, as happened in this case, we acknowledge our mistakes, we learn from it and that's what we will do after this effort,” Cook said.
The IS group has since January 2015 besieged the eastern city of Deir Ezzor where more than 200,000 people live. It controls more than 60 percent of the city, the capital of the province of the same name.