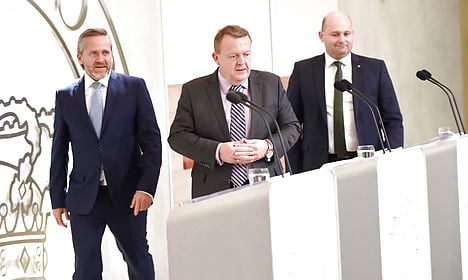 PM Lars Løkke Rasmussen (centre) presented his new alliance with Anders Samuelsen of the Liberal Alliance (left) and Søren Pape Poulsen of the Conservatives. Photo: Keld Navntoft/Scanpix
Lars Løkke Rasmussen's centre-right Venstre party has held only 34 out of 179 seats in parliament since June 2015, but will now expand to include the libertarian-leaning Liberal Alliance and the Conservative People's Party.
“We now have a platform we agree on, so Venstre, Liberal Alliance and the Conservatives can build, tomorrow, a tripartite government,” Rasmussen told reporters.
The new cabinet will be presented on Monday at 11am.
Rasmussen began talks with the two parties a week ago, after the Liberal Alliance threatened to topple the government unless it cut the top income tax bracket by five percentage points by the end of the year.
The three parties said on Sunday they had agreed to reduce Denmark's marginal tax rate, and that fewer Danes would fall into the highest tax bracket.
The coalition will however remain in the minority, with 53 seats, and will depend on the support of the anti-immigration Danish People's Party (DF) in parliament to pass legislation.
DF, Denmark's largest right-wing party which has cast itself as a defender of the country's cherished cradle-to-grave welfare state, had opposed the tax breaks and was not invited to join the government.
Rasmussen's government took office in June 2015 and has sparked controversy by scaling back social benefits and reducing the country's generous education budget.
It has also introduced several measures to limit the number of migrants coming to the country, most of which were backed by the largest opposition party, the Social Democrats.