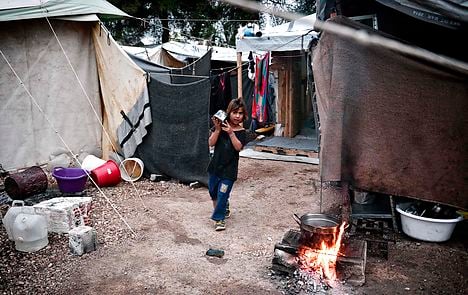 A child carries a cooking pot at the Ritsona refugee camp north of Athens Photo: AFP/LOUISA GOULIAMAKI/SCANPIX
“It will give the municipalities a little breathing space and room to better take care of those who have already come here,” Integration Minister Inger Støjberg told a meeting in the Danish parliament.
Støjberg, an immigration hardliner, said in August that the reception of 491 refugees through the programme this year had been postponed.
The decision to suspend the programme indefinitely had been taken so that Denmark could cope “economically, socially and culturally,” she said.
The centre-right minority government's move was backed by the anti-immigration Danish People's Party as well as the biggest opposition party, the Social Democrats.
Denmark, which has a population of around 5.7 million, has received around 5,700 asylum seekers so far this year, and expects the annual number to be less than half of the 21,000 applications it received last year.
In 2015 an influx of migrants led to chaotic scenes with hundreds of people marching on Danish motorways — most trying to reach neighbouring Sweden, which has more generous asylum rules.
Copenhagen enacted a host of measures to deter migrants from coming to the country earlier this year, including a controversial rule allowing police to confiscate their valuables to help pay for their accommodation.
It has also introduced legislation to allow it to turn back asylum seekers at its borders if the number of migrants spikes, and has made it harder for migrants to obtain permanent residency.