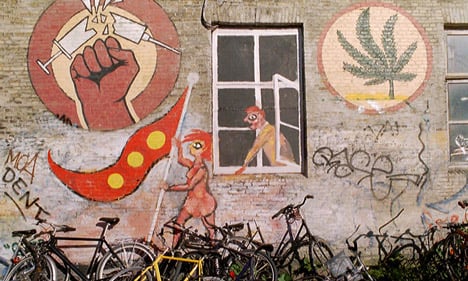 Christiania file photo: David Harding/Iris
Police said in a press release that investigators had identified “a large network of people who systematically produced more than 140,000 joints in a period of six weeks for the purpose of sales in Pusher Street”.
Police said that the operation was ran by people connected to the biker gang Hells Angels and its support group AK81.
Nine people were arrested in Tuesday’s action, including a 30-year-old Dane described as a “fully-fledged member” of Hells Angels and another 30-year-old with “connections” to the biker gang. The other seven arrestees were males between the ages of 19 and 61.
“We want to again send a clear signal to sellers and distributors that the police are continuing to investigate the criminality in and around Pusher Street and that the buyers at the same time will find it increasingly difficult if they continue to buy cannabis in Christiania,” Dannie Rise, the head of Task Force Pusher Street, said in a press release.
The bust is the latest episode in what has been a tumultuous year in Christiania, the alternative enclave established by hippie squatters in 1971.
In June, police carried out a massive raid and tore down the cannabis stalls only to have them rebuilt within hours.
On August 31st, two police officers and a civilian were shot in a drug bust gone awry. The suspected gunman was later shot and killed by police.
That led residents to shut down the infamous open-air cannabis market and ask Danes to buy their cannabis elsewhere. Sales of weed and hash have continued in Pusher Street, albeit in a less organized fashion and at a much smaller scale.
In the police statement, Rise seemingly encouraged Danes to buy cannabis elsewhere, something that critics of the heavy-handed approach say is easier now than ever after the crackdown on Pusher Street has spread sales throughout the city.
“At the moment there is no other place in Copenhagen where the chance of being busted by the police is bigger than in Christiania, so we don’t understand why people haven’t learned the lesson,” Rise said.
The unrest at Christiania, which is one of Denmark’s most popular tourist destinations, has led to renewed discussions about legalizing cannabis. Several political parties have thrown their support behind legalization but the three largest parties – Venstre, Social Democrats and Danish People's Party – remain opposed.
The Danish government has, however, softened its stance on medicinal cannabis by approving a four-year trial programme that will begin in 2018.