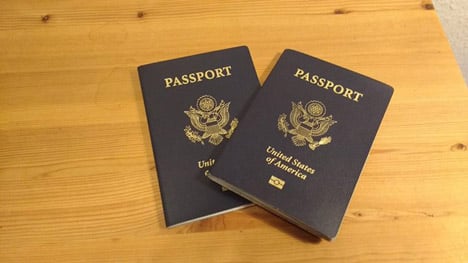 The American student went on the ‘Aarhus bulk trash’ Facebook group, where people post items that they’re willing to give away for free before setting them out on the curb for rubbish pick-up.
“Two American citizenships. If anybody wants them they’re yours – come and get them,” Forrest posted in the group along with a photo of the US passports belonging to him and his girlfriend.
The post received nearly 3,000 likes and 100 shares, which was much more than they expected.
“My girlfriend and I were hanging out with our housemate and talking about how ashamed we are of our country and she suggested we put our citizenships up on the free stuff page,” Forrest told The Local. “We thought it was funny, so I got my phone and added some pictures of our passports and posted it, expected a few likes and laughs. But then we watched the likes keep going higher and higher!”
Forrest said some people clearly didn’t get that it was meant as a joke, however.
“Some of the comments are people threatening to call the police, and I've actually had several private messages from people seriously asking to pick up the passports,” he said, adding that he also received a number of “cruel comments” after local newspaper Aarhus Stiftstidende first reported his story.
But while he and his girlfriend made the post in jest, he said he found nothing funny about the results of last week’s election.
“Since Trump won, my girlfriend and I have been in shock. It doesn't feel like other political losses where you feel bad about it but can maintain a distance. We can't believe that the world would allow such a greedy, hateful person who says such things to achieve the highest office,” Forrest said.
“The people that his campaign have empowered are supporting a fascist model of government that channels legitimate anger into scapegoating against immigrants, Muslims, women, queer people, the poor, the disabled, etc. There are some scary parallels to pre-war Germany,” the Aarhus resident added. James Forrest has lived most of his adult life in the San Francisco area but hopes to remain in Denmark. Photo: Private
Forrest made it clear that he and his girlfriend, who didn’t want to be identified, will be keeping their US citizenship.
But the California native said he hopes to settle down in Denmark, a country he first experienced in 2007 when he came to Grenaa as an exchange student. Forrest returned in December 2015 to pursue a degree in philosophy at the University of Copenhagen and commutes between the two cities each week for his studies.