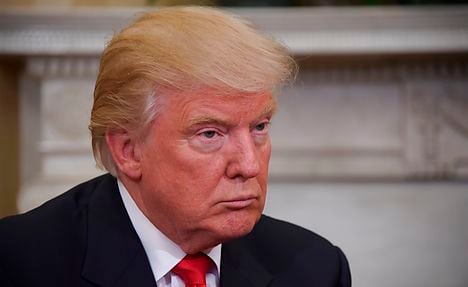 US President-Elect Donald Trump has said he doesn't believe in climate change. Photo: JIM WATSON/SCANPIX
Trump is a climate change denier, even positioning the theory that the whole notion of climate change is a “hoax” and nothing more than a ploy by China to weaken the US economy.

The concept of global warming was created by and for the Chinese in order to make U.S. manufacturing non-competitive.

He has said he will “cancel” the Paris climate deal within his first 100 days of taking office, has pledged to dismantle the Environmental Protection Agency and said he would increase investments in the American coal and oil industries.
The incoming president’s positions have left the international community shaken.
“Obviously some of the comments we have heard from Trump before his election cause some concern in terms of not wanting to implement the climate agreement. But we need to take a breath and look at the reality,” Lilleholt told news agency Ritzau.
Despite Trump’s pledges, the Danish government doesn’t think it will be as easy as the incoming president thinks to “cancel” the progress made at COP21.
“The climate agreement isn’t something you just pull out of overnight. When I look at the American policies within the climate arena, it makes me very happy about how our climate policies here at home are driven by broad [political] agreement,” Lilleholt said.
Denmark has set the ambitious goal of being fully independent of fossil fuels by 2050. Unlike in the US, there is no faction within the Danish government that has chosen to ignore the overwhelming evidence behind man-made climate change.
While Trump may not believe in climate change, polls show that most Americans do. A Gallup poll from earlier this year found that 64 percent of adults in the US are worried a “great deal” or “fair amount” about global warming, the highest number since 2008.
The Intergovernmental Panel of Climate Change calls the scientific evidence “unequivocal”, NASA writes on its official site that “97 percent of climate scientists agree that climate-warming trends over the past century are very likely due to human activities” and the Pentagon has identified has identified climate change as a threat to US national security.