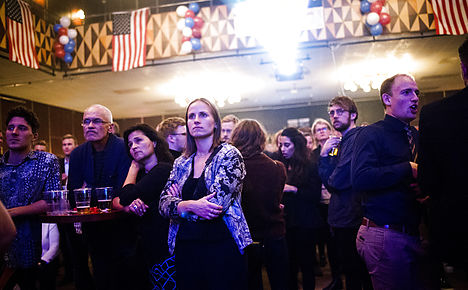 An election night party in Copenhagen turned into a scene of dejection and shock in the wee hours. Photo: Photo: Ólafur Steinar Gestsson/Scanpix
Copenhagen music venue Vega played host to what was billed as a victory party for Hillary Clinton. As the results streamed in via a giant screen displaying CNN, a once jubilant room got quieter and quieter and a crowd that peaked at around 700 thinned out to just dozens of stragglers by sunrise.
The Vega crowd was primarily made up of Danes, who polls show overwhelmingly supported Clinton over Trump. In attendance too were American expats who were watched on in a mix of surprise and horror as it became clear that Trump was going to win the election.

The view from #Copenhagen: A couple hundred downcast Danes watch on at 4am pic.twitter.com/x0R5whHUNH

Matt Gillum, an American scientist who has lived in Denmark for the past three years, said Trump’s victory will likely change the way he views his relationship to the US.
“It will fundamentally pervert my incentive to participate meaningfully in American democracy, basically,” he told The Local. “It’s toxic for my sense of civic involvement in the US – you just want to give up on it all.”
Gillum said he worries about Trump’s unpredictable nature and dejectedly said that the next four years could be “apocalyptic”.
David Miller, the spokesman for Democrats Abroad Denmark, was equally downcast as he watched Trump win one battleground state after another.
Miller personally helped organize the Vega event, which was hosted by the Danish Social Democrats, but he obviously did not get the outcome he was hoping for or expecting.
He called Trump an “odd and vulgar candidate” and said that the fact that Americans elected a man who has said so many inflammatory things about women and minorities reveals some ugly truths about his countrymen.
“[Trump’s win] shows that we have a very damaged society in the US. Some of the things he stands for do not belong in civilized society,” he said.
“We have a very split country, just look how close the election was,” Miller added. “So there is a lot of healing that needs to happen in the United States and I’m not quite sure that with the Republican party the way it is that we’ll get that healing.”

Miller said he was also worried about Republicans controlling Congress.
“They're against women, they’re against minorities, they are against the black president. They’re just against Democrats now. The Republicans who are in power now are not into cooperation, they are into obstruction,” he said.
The Democrats Abroad Spokesman said he had an ironclad plan for dealing with the next four to eight years, however.
“I’m going to move to Denmark,” Miller, who has already lived here for 35 years, joked.