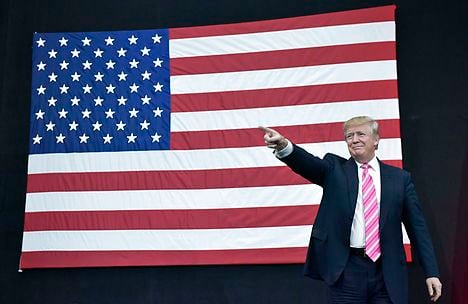 President-Elect Donald Trump. Photo: MANDEL NGAN/SCANPIX
“An unusually hard and confrontational American election has now reached its end. It’s good that we now have clarity on who will lead the US over the next four years and I would like to congratulate Donald Trump on the election,” Rasmussen said in a statement.
The Danish PM also sent a message via Trump’s preferred channel of communication, Twitter.

Congratulations @realDonaldTrump. Remember our strong transatlantic ties and the importance of #TTIP. #USElection2016

Danish leaders have expressed fear about what a Trump presidency will mean for Denmark, with Finance Minister Claus Hjort Frederiksen saying as recently as Tuesday that the Danish economy could suffer under Trump’s stated trade policies.
Foreign Minister Kristian Jensen has also aired reservations about Trump, famously opining that the incoming president “changes opinions like the rest of us change underwear”.
On Wednesday, however, Jensen tweeted his congratulations to the president-elect.

Justice Minister Søren Pind too is on record slamming Trump for his “racism, misogyny and contempt for the rule of law”. Pind, an unabashed fan of former Republican President Ronald Reagan, spent much of election night retweeting negative comments and stories about Trump. As Trump’s victory became clear, however, Pind wrote that the people had spoken.
“I underestimated the anger out there. And yes, in a democracy – we can never forget it – the people decide. I pray that they have seen something that I could not,” he wrote on Facebook.
The prime minister used his short statement to express his hope that a Trump administration “will continue the open and constructive cooperation that has characterized the United States for many years”.
“Europe needs a strong United States that will lead the free world and be based on democracy and dialogue,” Rasmussen wrote.