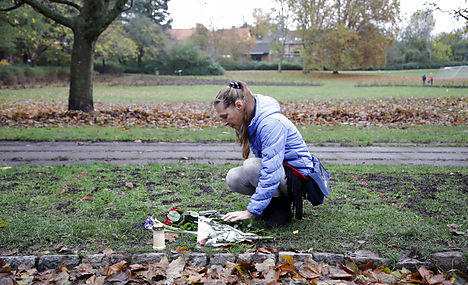 A woman lays flowers on Saturday at the spot where a 32-year-old was murdered the night before. Photo: Martin Sylvest/Scanpix
The victim, who was described as “visibly pregnant”, was walking her sister's dog in a park in the Copenhagen suburb of Herlev when she was attacked.
She was found by a random passerby at 7.15pm and pronounced dead at the scene. The woman had been stabbed several times with a knife.
“We have a gruesome murder of a pregnant woman and no perpetrator. So it is extremely important to receive tip-offs from the public in this case,” police commissioner Hans Christian Tonnesen said on Friday.
The tabloid Ekstra Bladet reported that the woman had also been attacked with an axe, but police have not confirmed that detail.
Police are asking anyone who may have found themselves in Herlev’s Elverparken between 6.30pm and 7.30pm on Friday to come forward, “including those who didn’t see anything suspicious,” Tonnesen said.
By Sunday, one eyewitness had step forward to report that a man was seen running from the park around the time of the murder.
“The most important clue at the moment is the witness who saw a man run from the park right after she heard two loud screams. He is suspected [but] we haven’t spoken with him yet,” Tonnesen said on Sunday.
According to the witness, the man immediately stopped when he was spotted and put his hands up in the air before turning around and running back into the park.
The witness described the man as being between the ages of 28 and 30. He is around 180cm tall with a slim build and a small face. He was wearing all black clothing with a black hood over a black hat.
As of Monday morning, police had neither found the man or made any arrests. An autopsy of the victim will be carried out later in the day.