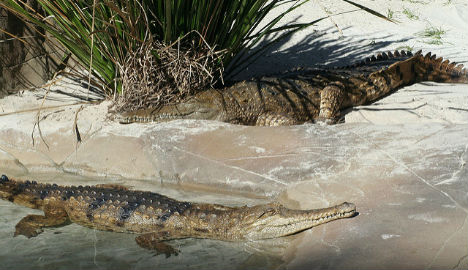 Freshwater crocs or 'freshies' are common in northern Australia. Photo: Kevin Trotman/Flickr
Johnny Bonde, 27, said he was at Lake Kununurra in Australia's tropical north late Friday when he spotted a freshwater crocodile in the water and perched on a bank to take photographs of it, The West Australian reported
Saturday.
“Next thing I know I'm sliding down the bank and then I just toppled over and landed straight on top of the croc. He got a pretty good grip on me and shook me around a bit,” Bonde told the newspaper. “There was just splashing and I could feel a bit of pain in my arm; it wasn't that bad though, I was more shocked than anything.”
A video obtained by the West Australian showed Bonde holding his bloodied right arm above a sink. He was treated in hospital for deep cuts to his arm, the newspaper said.
Bonde said he felt “stupid” and understood why the crocodile, which he estimated was about 2.5 metres (8.2 feet) long, bit him.
“It was the result of me being stupid,” Bonde told Perth's Sunday Times newspaper. “I pretty much body slammed him. If somebody body slammed me at night, I would be angry too.”
Australia is home to two crocodile species — the freshwater and the saltwater. Both are found in northern Australia, with “freshies” growing up to 2.5 metres long while the larger and more feared “salties” can be as big as seven metres long.