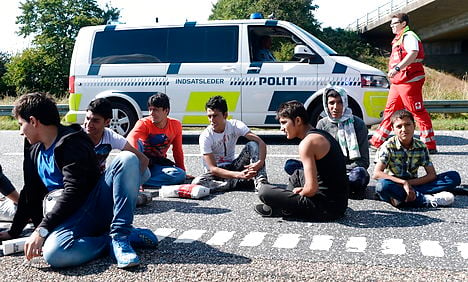 2015 file photo of migrants blocking a motorway in Jutland. Photo: Claus Fisker/Scanpix
A total of 117,600 kroner (€15,805, $17,525), all of it in cash, had been confiscated, Danish police told AFP in an email.
“When they asked if I had 10,000 kroner, I answered 'yes',” asylum-seeker Ali Abdel Razaq told broadcaster Radio24syv in an interview broadcast on Wednesday, adding that he had been unaware that any cash or valuables above that amount had to be handed over to the authorities.
Soon after, police came knocking on his door at an asylum centre in the small southern town of Bolderslev on October 22nd, forcing him to hand over 8,000 kroner.
“I was hit by three roadside bombs in Iraq during my work as a police officer,” Razaq said, adding that he “would have have spent the money on an operation or some equipment”.
See also: Here's how Denmark's famed 'jewellery law' works
The law was first used on June 30th, when five Iranians had to hand over a total of 79,600 kroner, police said.
It was used a second time on July 14th, when an Iranian family of four had to pay 10,300 kroner, and again on August 3rd when an Algerian man had to give up 19,700 kroner.
A lawmaker for the anti-immigration Danish People's Party, Martin Henriksen, said the law had been “a success in the sense that it had sent a signal that we have tightened [the rules] in Denmark”.
An MP from the leftist Red-Green Alliance (Enhedslisten), Johanne Schmidt-Nielsen, said that the small amount of money raised showed that the “stupid law” was only intended “to send a signal to the world that it's not much fun to be an asylum-seeker in Denmark.”
See also: World still loves Denmark despite negative attention
The measure sparked sharp criticism from abroad when the Danish parliament passed it in January with the US-based rights watchdog Human Rights Watch (HRW) calling it “despicable”.
Prime Minister Lars Løkke Rasmussen, however, defended the law as “the most misunderstood bill in Denmark's history”.
Denmark received more than 21,000 asylum applications last year, a 44 percent jump from 2014.