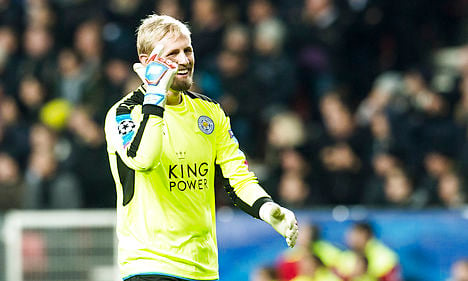 Leicester's Kasper Schmeichel. Photo: Ólafur Steinar Gestsson/Scanpix 2
Leicester came into the game with dreams of winning Group G but are not through to the last-16 yet despite their table-topping ten points with Porto second on seven and Copenhagen third on five with two games left.
Visiting coach Claudio Ranieri, who led Leicester to an astonishing Premier League title last season, was disappointed.
“Ten points is good but it's not enough. Porto are close behind us,” the Italian said.
Schmeichel's late crucial save came in the 90th minute as Copenhagen launched a late assault.
Centre-forward Andreas Corneleus angled a header toward the bottom corner that looked destined to clinch all three points but the Danish international 'keeper got a good hand to the ball.
Shaven-headed coach Ståle Solbakken trudged glumly along the touchline as his charges failed to deliver a goal.
Copenhagen's Paraguayan striker Federico Santander stretched the Leicester defence and loitered at the back post every time a cross came over, keeping Schmeichel on his toes without seriously threatening him.
Leicester, however, were no better even if the Premier League champions edged the Danes 1-0 last time out.
Copenhagen 'keeper Robin Olsen ran out of his goal to kick away a long ball over the top but sliced his effort and was forced into a panicked scramble back to goal, where the limpest of shots on goal eventually came from Ghana's Daniel Amartey.
A former Copenhagen player, Amartey produced a series of frustratingly poor shots from distance.
Leicester also relied on the long ball for long periods and even if Jamie Vardy was the liveliest man on the field, Copenhagen marked him out of the game.
Vardy was consistently crowded out, especially when he lingered uncharacteristically just before half time when his shot from the edge of the box was smothered by a cluster of converging Copenhagen players.
Leicester's Riyad Mahrez ran onto a pass from Danny Drinkwater in the 70th minute only to be cheekily dispossessed by Erik Johansson while he was eying a shot.