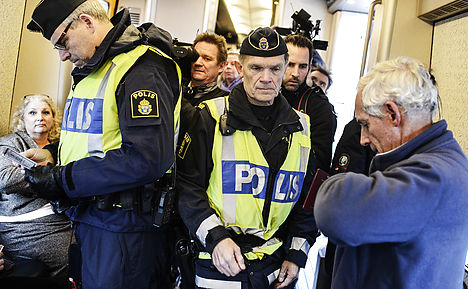 Swedish police check commuters upon arrival at Hyllie Station, the first stop in Sweden. Photo: Simon Læssøe/Scanpix
The decision was reached through an extraordinary cabinet meeting, a representative of Sweden’s infrastructure minister Anna Johansson confirmed.
Johansson’s press secretary clarified to The Local that Wednesday’s call does not cover the decision over border controls in the south of Sweden, a separate issue which is also expected to be concluded in the coming days.
The move comes only a few days before the current period for the photo ID checks was due to expire, and it is a controversial one for commuters between Sweden and Denmark, who have complained that the measures lengthen their commuting times significantly and violate their right to free movement and to enter their own country.
See also: Danes seek damages from Sweden for border checks
“From the perspective of commuters we think it’s very sad news,” Linus Eriksson, head of transport at regional public transport authority Skånetrafiken, told news agency TT.
Sweden's ID checks for rail, bus and ferry companies were introduced in January 2016 as it struggled to get to grips with an influx of refugees to the country. A record 163,000 asylum applications were lodged in Sweden in 2016.
The ID checks followed on from the introduction of Swedish border controls in November 2015.
Denmark introduced its own border control measures at the German border in January 2016, positioning the decision as a necessary response to the Swedish controls.
Denmark’s measures are currently due to expire on November 12th but the EU Commission recently granted a joint request from Denmark, Sweden, Norway, Germany and Austria that allows for the temporary controls to be extended for an additional three months.
As of Wednesday, the Danish government had not announced if it intends to extend its border controls again.
Asylum numbers have plummeted since Denmark’s border controls were enacted. Through September, some 5,300 people had applied for asylum putting the Scandinavian country on pace to end the year well below the 21,000 asylum applications it received in 2015.