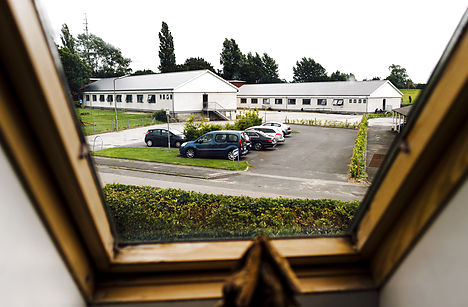 A female employee is accused of having sex with three underage residents. Photo: Lasse Hansen/Fyens/Scanpix
The municipality announced via a press release that Sisi Eibye was fired with immediate effect.
The announcement came after Radio 24syv revealed lurid details about the sexual assault claims that surfaced last week.
The radio station reported that a female employee’s sexual acts with underage asylum seekers were both photographed and recorded on video. The material shows the woman having oral sex with at least one asylum seeker and full intercourse with one of the boys.
Radio 24syv obtained the police report that Langeland Municipality delivered to Funen Police in June. In it, municipal officials say that they suspect the female employee of having sexual relationships with three boys at the centre.
See also: Troubled Danish asylum centre closes amid sex claims
The Danish Immigration Service (Udlændingestyrelsen – DIS) last week announced its decision to shut down Børnecenter Tullebølle after being informed that two female employees of the centre are suspected of having sexually violated one or more boys under the age of 18.
Integration Minister Inger Støjberg told broadcaster DR that the two women in question were removed from their posts and that Funen Police will now investigate the sexual assault claims.
On Monday, police would neither confirm nor deny the new revelations.
“But it is clear that we are taking this case very seriously. When one’s role is to protect vulnerable children, this is a very serious allegation,” spokesman Sten Skovgaard Larsen told Radio 24syv.
Documents obtained by the radio station showed that although the sex abuse claims were first reported to DIS and the public last week, at least three high-placed municipal employees were aware of the situation as far back as June 10th.
Langeland Mayor Bjarne Nielsen was reportedly not informed about the sex case and said that he will now speak with other municipal leaders to find out who knew what and when they knew it.
The sex abuse allegations are the latest in a series of problems at the centre, which houses roughly 40 underage boys.
Last month, the centre’s residents were involved in a mass brawl. No one was seriously injured but an employee of the centre was struck by a 15-year-old boy with a metal pipe.
In August, five teenage boys from the centre were charged for sexual assaults committed during the Langelandsfestival. Three were charged with groping, and two for raping a 16-year-old girl.
The month prior, boys from the centre took part in a fight involving upwards of 100 minor asylum seekers during a football match against residents of another asylum centre.