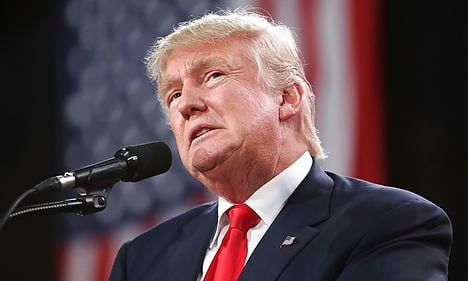 Republican presidential hopeful Donald Trump doesn't have much support in Denmark. Photo: Joe Raedle/AFP/Scanpix
On Wednesday, at least one of the 1-A buses in the Danish capital was wrapped in an advertisement from the Socialist People’s Party (SF) reading ‘Americans Abroad: Vote’. Just who SF wants the Americans to vote for was made quite obvious by the the close-up of Republican candidate Donald Trump’s face in which the wheels of the bus were made to give him a pair of googly eyes.

SF leader Pia Olsen Dyhr told broadcaster DR that while the ad was meant in good fun, she finds the idea of a Trump presidency “frightening”.
“It is meant to be a bit funny. One can’t be in doubt that it was done tongue in cheek. We want to tell American citizens: ‘Remember to vote, it has consequences’,” Dyhr said.
The anti-Trump bus ad comes at the same time that a Danish-produced animated music video is quickly making the rounds on Facebook and Twitter.
Danish-American producer Noah Rosanes and a group of Danish backing musicians, graphic designers and animators last week released the music video ‘Stop the Trumpet’.
The song opens with a line that targets one of Trump’s signature positions and one of his perceived physical shortcomings: “Build a wall ten feet taller, only makes your hands look smaller”.
The video shows an animated trump being blown back in forth by trumpets and getting stomped in a virtual game of whack-a-mole. The song’s chorus says “we’re gonna save the world” but only if we first “stop the Trumpet”.
Rosanes said he created the video out of fears of what a Trump presidency would mean for the United States and beyond.
“Like many others, I felt powerless over the way Trump presented his twisted view of the world. I’m sincerely scared of how the world would look if he gets the world’s most powerful job,” he said.
“Trump is a man without political experience who only incites hatred and creates division at a time when we in particular need to stand together around the world. Sometimes you have to step up and do something and as a musician this is my way to communicate,” Rosanes added.
While Trump certainly has some supporters in Denmark, they are in the minority. A poll from the spring found that only four percent of Danes would vote for the Republican candidate if they could participate in the US election.
Rosanes and his team will perform their anti-Trump song live on election night at the Democratic Election Night Party hosted by the Social Democrats. The party is being held at Copenhagen concert venue Vega and will run from 8pm on November 8th through 8am on November 9th.
Tickets for the election night event in Copenhagen can be found here.