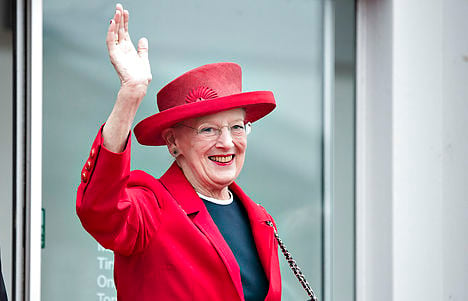 “It’s not a law of nature that one becomes Danish by living in Denmark." Photo: Henning Bagger/Scanpix
In the book, written with journalist Thomas Larsen, the Danish queen says that some immigrants and refugees have failed to properly integrate into society.
“It’s not a law of nature that one becomes Danish by living in Denmark. It doesn’t necessarily happen,” Queen Margrethe says.
The queen goes on to say that certain groups of people are better at integrating than others.
See also: Denmark's queen to publish history of the nation
“Those who came from Southeast Asia have generally prospered. Others have had more difficulty adapting. They have had a hard time finding their rhythm in Denmark,” she says.
Queen Margrethe also says that Danes have been naive in thinking that integration wouldn't take hard work on both sides.
“We thought that these things would take care of themselves. That if you walked through the streets of Copenhagen and drank the municipal water and rode the municipal bus, you’d soon become a Dane. It was so obvious to us, and therefore we thought that it must also be obvious for those who settled and lived here. It wasn’t,” the queen says.
See also: Queen Margrethe wades in to immigration debate
Repeating a message she delivered ahead of her 75th birthday last year, Queen Margrethe said Danes need to be better at conveying the values and rules that society holds dear.
“If you can’t formulate what you stand for, it is hard to tell others about it. It needs to be worked on and every once in a while you need to put your foot down with somebody and say ‘Hey! That won’t do’,” she says in the new book, ‘De Dybeste Rødder’ (‘The Deepest Roots’).
The queen’s comments in the new book come just a few weeks after she told German newspaper Der Spiegel that while she represents “all people who are citizens of the Danish nation”, she doesn’t view Denmark as a multicultural country.
See also: Queen Margrethe: Denmark 'not a multicultural country'
They also come amidst an intense national discussion about what makes somebody a Dane. Sparked by comments on a political TV programme, the issue even made its way to the New York Times.
Although this isn’t the first time Queen Margrethe has addressed the hot-button issues of immigration and integration, Lars Hovbakke Sørensen, a history professor who is an expert on the Danish royal family, told broadcaster TV2 that the queen has “become more and more sharp in her comments”.
“She is moving right to the edge [of the political, ed.]. She is pointing to some concrete societal problems and getting us to think about them in a new way, but she never points to any concrete solutions to the problems. If she began [doing that], then she will have crossed over to the political,” Sørensen said.
The right-leaning Berlingske newspaper, for which Larsen is a political commentator, wrote an editorial on Monday in which it asked if “Her Majesty shares opinions on integration with the Danish People’s Party” or if the queen would even go so far as to be a member of the notoriously anti-immigration party.
The paper wrote that the answer to these hypothetical questions was “probably a resounding no” and that Queen Margrethe instead was merely giving voice to positions held by most Danes.
“The queen’s opinions show that […] she has an outstanding talent for being a political temperature gauge,” Berlingske wrote.