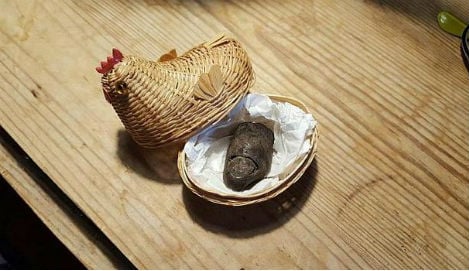 The toe has been part of Birte Brorson's family life for decades. Photo: Nina Brorson
The toe, still complete and intact with its mummified toenail, was returned by the daughter of the man responsible for restoring the body, who took it home when it was cut off in the 1950s as part of an experiment in perservation techniques.
Birte Brorson said the toe had been part of her childhood.
“I brought the toe with me to school once to show my classmates,” Birte Brorson told The Local. “We read about the Tollund Man, and I said, 'I’ve got his toe at home'. No one believed me, so I brought it there to show them.”
Tollund Man was found in 1950 buried in a peat bog on the Jutland peninsular.
Although he lived and died in the 4th century BC, his features had been so well preserved by the acid in the bog that the people who discovered him at first thought he was a recent murder victim.
According to Brorson the toe was not the only ancient artefact her father brought home.
“My father had all kinds of things lying about: coins from the Gundestrup cauldron, parts of a Viking ship – things that are handed back today,” she told TV2.
But she told The Local that it would be wrong to interpret this as theft or souvenir-collecting.
“It’s like you taking your computer home when you want to work on the weekend,” she said.  “The toe ended up with him here and then got lost, and was lost for many, many years.”
She stressed that her father, who ended his career as a museum inspector, had been a serious scientist and was not the sort of person who would keep a toe as a joke.
The family found the toe when they emptied their parents' house when her mother was moving into an old people's home.
“We found it in a box where my father kept his tools and things like that,” she said. “We thought, 'that's the toe', and put it in a basket to take to my mother’s house, and for the last 11 years it was with my mother’s belongings.”
When they discussed returning it, their mother stopped them. “My mother said to me ‘don’t give it back to them, they’ll just throw it away’,” she said.
The father's keeping of the toe is perhaps not as bad as might be supposed, as conservation techniques in the 1950s were not good enough to preserve the whole body, so the forensic examiners decided to only preserve the head and did not keep the rest of the body intact, although some other body parts were preserved.
“That was the feeling we had. 'This is nothing'.  At the time we had it bits of the Tollund man was scattered all over Europe.”
The Silkeborg Museum created a reconstruction of the body in 1987, which is what visitors can see today together with the original head.
Brorson said she had been surprised by the reaction when she contacted the museum a week ago.
“They were very, very enthusiastic and I didn’t expect that. I didn’t expect to be called up by journalists. Now it’s a very big deal and I’m very happy it is a very big deal. I’m very, very happy that this toe is precious, because I always thought it was.”
“We are ecstatic here at the Silkeborg Museum. It's fantastic,” Ole Nielsen, the museum’s director told TV2.
The toe will be presented to the museum on 31 October.
Here is Tollund Man as displayed in the museum: Here is the eerily well-preserved face, shortly after it was found. And here is the body at the time of its discovery in 1950.