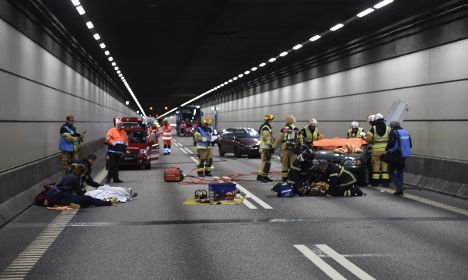 Actors and emergency workers taking part in the drill on the crossing between Denmark and Sweden. Photo: Björn Lindgren/TT

The crossing between Copenhagen and the southern Swedish city of Malmö (made famous by Nordic crime drama The Bridge) was closed for three hours on Wednesday night as Danish and Swedish emergency services carried out the large scale drill.

The scenario – involving 350 people in total – started with a planned fire on a train in the railway tunnel section of the bridge. About 100 actors playing passengers then called emergency services and fled through exits out to the parallel motorway tunnel, leading to some being hit by cars, others being trampled over, and vehicle crashes.

Pictures taken of the exercise by Swedish news agency TT show the surreal sight of extras lying in the middle of the normally busy motorway and being attended to by paramedics. “Some of the extras were heavily made-up and they really went for it, screaming loudly,” TT reported from the scene.

The Øresund Bridge Consortium (Øresundsbro Konsortiet), which owns and runs the crossing, explained that the point of the drill was to ensure knowledge of and access to emergency escape routes is sufficient should there ever be an accident on the bridge.

Police were not entirely satisfied with the time it took for the alarm to reach them from the burning train however.

“It took a little too long for the emergency services personnel to arrive, but once they did they did everything right,” Jens Jespersen of Copenhagen Police told Swedish newspaper Sydsvenskan.

This was the first time that an exercise on both the railway and motorway sides of the bridge had been arranged since it opened in July 2000.