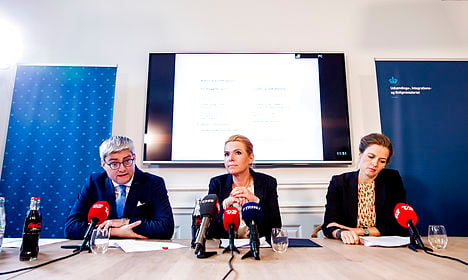 The plan was presented by Justice Minister Søren Pind, Integration Minister Inger Støjberg and Education Minister Ellen Trane-Nørby. Photo: Uffe Weng/Scanpix
Part of the new plan was for the Danish Security and Intelligence Service (PET) to form a “national alliance against online radicalization” including authorities and people from civil society, to which the new “voices of reason” project would be linked.
“A civil society-driven corps of digital voices of reason will be established,” the Ministry of Justice said in a presentation of the anti-radicalization plans.
The group would “systematically be present in social media and engage critically in relevant forums, take part in dialogue and challenge extremist views,” it said.
A new unit would also be formed within PET to identify and remove extremist material from the internet. The government would also seek to introduce a filter against “violent extremist online material”, modelled on the filter against child pornography used by the country's major internet service providers.
But experts said such a filter could easily be circumvented by using a VPN connection.
“Those who are dedicated and really want to will always find a way around,” Justice Minister Søren Pind told public broadcaster DR, adding that the filter was aimed at young people who were easily influenced.
The new rules would also make it easier to prosecute those spreading “extremist material” online.
Other proposals included making it harder for foreign fighters to claim social benefits and requiring religious sermons to be held in Danish.
Earlier this year Denmark banned travel to conflict zones where terror groups operate, and since last year authorities have been able to seize passports and issue travel bans if a person is suspected of planning to participate in armed conflict abroad.
The Danish city of Aarhus has drawn international attention for its “soft-hands” approach to battling religious radicalization with social techniques used in gang exit strategies, but Justice Minister Pind has said that it is unclear if the method really works.