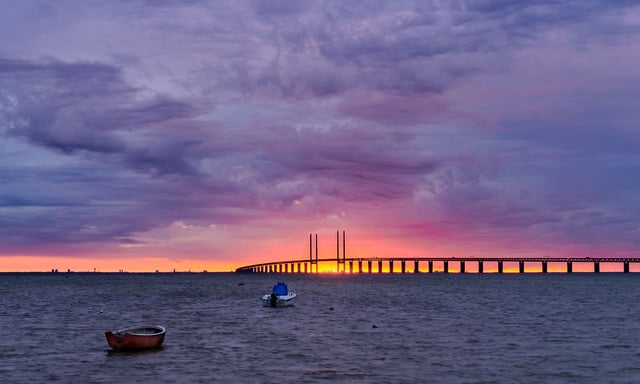 All vehicle traffic will be closed for three hours. Photo: bjorntornqvist/Iris/Scanpix
On Wednesday evening, around 200 people, including Danish and Swedish police, emergency services, regional authorities and around 100 actors, will take over the Øresund Bridge. But they are not shooting a scene for popular TV series ‘The Bridge’ – they are staging a major incident to test authorities' preparedness for emergencies.
“Every day nearly 20,000 vehicles cross the Øresund Bridge. The number of trains are almost 200 in one day. Security demands are high and Øresundsbro Konsortiet, authorities and rail operators are continuously working to improve and develop their contingency and crisis work,” read a press release from Øresundsbro Konsortiet, the group that owns and operates the bridge.
“The purpose of the exercise is to ensure that contingency plans, for example planning and knowledge of the crossing's accessibilty and escape routes, are sufficient to be able to handle an accident.”
The bridge will be closed for all vehicles between 8pm and 11pm. A number of trains between Copenhagen Airport and Copenhagen’s Østerport Station have also been cancelled.
Both regular commuters and those flying to or from Copenhagen Airport are advised to allow plenty of time for travel and check Skånetrafiken's or DSB's website for an updated train schedule.