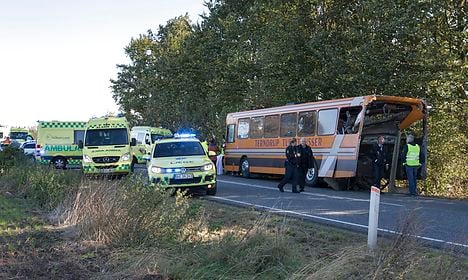 Ten of the injured teens were still in hospital on Friday. Photo: Rasmus Skaftved/Scanpix
North Jutland Police told news agency Ritzau that the driver of the bus was having trouble controlling his teenage passengers as he brought them back from Danish lessons.
“He had already pulled over to the side of the road a few times to get them to sit down. But they kept running around. So he stepped on the brake to stress that they needed to sit down – not stand up,” Commissioner Jørn Kresten Nielsen said.
“What he didn’t realize is that there was a lorry driving directly behind him,” Nielsen added.
See also: 16 refugee kids hurt as bus hit by lorry in northern Denmark
According to police, the driver of the lorry had no chance to apply the brakes before rear-ending the bus.
Nielsen did not directly indicate blame in the accident, which left 16 of the young passengers injured. Ten of the teenage boys were still in hospital as of Friday morning.
“You shouldn’t brake for no reason and you should also keep enough distance so that you can stop for all foreseeable obstacles. But I don’t know if it is a foreseeable obstacle if the vehicle in front of you suddenly brakes without any traffic-related reason to do so,” the police commissioner said.
Several of the underage passengers suffered broken arms and legs while others suffered head injuries.
The drivers of the two involved vehicles were not hurt.
According to broadcaster DR, all of the kids on the bus are in Denmark as unaccompanied minor asylum seekers. Their ages range from 13 to 17.