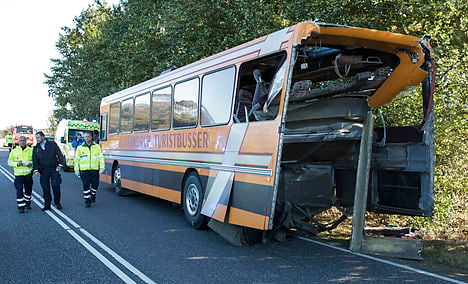 The bus was struck by a lorry near the village of Stenild. Photo: Rasmus Skaftved/Scanpix
North Jutland Police said in a press release that the accident occurred shortly after 2pm on Thursday when the lorry struck the rear end of the bus.
Police wrote that the refugee children were returning from Danish lessons when the bus they were in applied its brakes and was rear-ended by a lorry.
Of the 38 children on board, 16 were injured. One of those was injured so severely that emergency helicopter transport to Aarhus University Hospital was necessary. Police said that the other injured kids were taken to both Randers Hospital and Aalborg University Hospital.
According to broadcaster DR, all of the kids on the bus are in Denmark as unaccompanied minor asylum seekers. Their ages range from 13 to 17.
The short police press release did not indicate any blame in the accident.