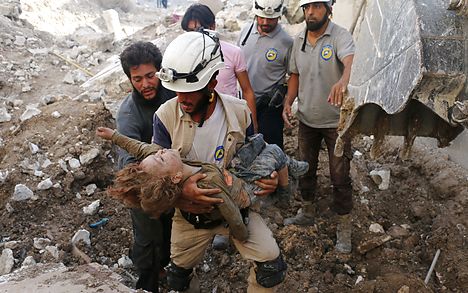 A Syrian civil defence volunteer, known as the White Helmets, holds the body of a child after he was pulled from the rubble following a government strike in Aleppo. Photo: Ameer Alhalbi/AFP/Scanpix
MPs Jan E. Jørgensen and Jane Heitmann of the ruling Venstre party and Conservative MPs Naser Khader and Brian Mikkelsen wore black shirts that read ‘Syria. Aleppo is bleeding #savesyria’.

The speaker of parliament, Pia Kjærsgaard of the anti-immigration Danish People’s Party, told the MPs that their shirts were an inappropriate form of demonstration.  Jørgensen wrote on Twitter that all four of the MPs were then kicked out of the chamber.

Syria-born Khader coordinated the demonstration.
“I’m not normally an activist like this. But what we are witnessing in Aleppo is completely unique,” he told Berlingske newspaper.
The rebel-held city has been hit by an intense bombing campaign by Syrian government and Russian forces that has killed a large number of civilians, including over 100 children, in just over a week.
Kjærsgaard told broadcaster DR that it wasn’t accurate to say that she had kicked them out.
“I asked them to take the shirts off and that is completely common in there [the parliament chamber, ed.]. We have so many rich opportunities to express our opinions from the podium. That’s why we are politicians. It’s not okay to sit with t-shirts or other things that express a political point of view,” she said.
Kjærsgaard dismissed the whole thing as nothing more than a political stunt.
“They were asked to change. But now they’ve gotten the press coverage they were after. That is what it was all about in reality,” she told DR.
According to Khader, however, the shirts were meant to encourage Denmark to do more in Syria.
“Condemnation and indignation does not save lives and I am incredibly frustrated that the international community is just sitting on its hand while civilians in Aleppo are massacred,” he told Berlingske. “I believe that Denmark should say it is ready to contribute with fighter jets. I’m not talking about a land intervention but rather stopping the Syrian regime and the Russians’ air bombardments.”