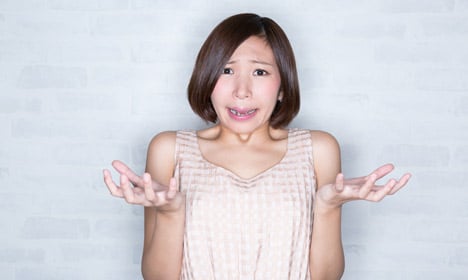 We feel your pain. Photo: kei907/Iris/Scanpix
1. You struggle with introductions.
Chances are, Danes won’t get your name. Not the first time, not the second, not the third. So you’ll end up using your middle school nickname or just give up and introduce yourself as Sara. And of course the same issue is valid the other way around. You won’t understand their name because you chances are you won’t understand anything they’re saying – see point 13.
2. You still can’t pronounce things right.
Pronunciation is the first obstacle to learning Danish and one of the challenges that will haunt you forever. Remember the first time in class when you had to learn to say 'My name is…'? Not much has changed since then. Your tongue and throat still struggle to perform all the acrobatics this language requires. And when a subtle difference in pronunciation is all that separates the Danish words for mother from murder, or 'My name is…' from 'I hate..', getting it right becomes pretty important. “I didn't say I HATE Jim. I am Jim!” Photo: Uber Images/Scanpix
3. Danes won’t speak to you in Danish.
No matter how hard you try to pronounce words correctly, use the right intonation and even pepper your remarks with the occasional altså and jamen, Danes will realize you have a foreign accent within ten seconds and answer you in English. And you won’t be sure whether to feel more hurt or relieved.
4. You still can’t make sense of the number system.
The Danish number system is bonkers. Unlike most Western languages, it’s 20-based instead of 10-based. That means that a number like 50 isn’t something straight forward like femti (five tens) but rather halvtreds (half of three times twenty). On top of that, the second digit in a number is said first. Good luck following along when a Dane tries to tell you their phone number or the total of your bar order. If you can manage to convincingly say your own CPR number, at least you’re on the right track.
5. En or et, that is the question.
Like most languages featuring gendered nouns, there is no logic and no rule behind the use of one or the other. You’ll always remember the apologetic face of your Danish teacher shyly suggesting you to look it up in the dictionary as if that was a feasible and reasonable thing to do. You feel betrayed, we know it. Just remember to be grateful that your chances of guessing the right article are 50-50, unlike, let’s say, in German where your chances are one out of three. Et æble, en æble? Photo: eikotsuttiy/Scanpix
6. You’re hopeless with ‘modalverber’.
Because kunne, skulle, ville and måtte are just all there to offer you endless possibilities to say the wrong thing. Also, don’t try to translate them to English to make sense of them. That’s always a bad idea.
7. You say everything in present perfect because it’s easier.
Still can’t wrap your tongue around the -ede ending of a past tense verb? Join the club! That’s why we find ourselves preferring the present perfect – It’s just easier to say “Jeg har lavet” (I have made) than “Jeg lavede” (I made). Sure it’s not always appropriate but our mouths were simply not made to say -ede like a Dane. This is what I think of your past tense verbs. Photo: Pathdoc/Scanpix
8. Ok, admit it: You struggle with verbs in general.
When the teacher told you there were three groups and they all behaved accordingly, you sighed in relief. But that lasted only until you found out there’s no way of telling what verb belongs to what group, and that the third group is completely irregular. The headline of that chapter in your grammar syllabus should be something along the lines of “Verbs: three groups, countless facepalms”.
9. You can’t say who owns what.
Her and his don’t just translate to hans and hendes. Depending on whether they refer to the subject of the sentence or not, they can also be sin, sit or sine. While in writing you actually have the time to think about those dear old grammar rules, you know that when speaking you’ll just give up and shoot for whichever.
10. Mastering inversion remains elusive.
It doesn’t matter how many times you’ve had it explained to you in Module 1, 2, 3, 4, and even Module 5. Your teacher will keep drawing all those red arrows on your written assignments pulling verbs after subjects.
11. Same with prepositions.
We know how you felt when you found out that going to school, to the restaurant and to a party translate into “i skole“, “på restaurant” and “til fest”. Again, this trick was obviously created for the sole purpose of dispelling all your hopes of ever mastering the language. Study all you want, you'll never get it. Photo: nickshot/Scanpix
12. And adjective endings.
You’ll mostly get away with it whilst speaking, but when it comes to writing, that’s when you really, really have to make a memory effort and remember that Module 1 grammar that you still haven’t quite mastered. Yes, you should have studied more. Yes, you should have done your homework. No, you shouldn’t have skipped all those lesson because of, you know, Netflix.
13. You still simply don't understand what Danes are saying to you.
And this will keep happening even at the stage where you think you’re getting pretty good at this language. What to do in these cases? If your Danish interlocutor hasn’t switched to English yet after your second 'undskyld?', it’s probably a good time to smile, change subject and hope for the best. I. Have. No. Idea. What. You're. Saying. Photo: Studio Grand Guest/Iris/Scanpix

For more fun with the wacky Danish language, be sure to check out the following: