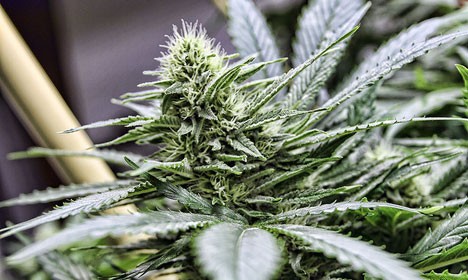 A cannabis plant. Photo: Coleen Whitfield/Flickr
Claus ‘Moffe’ Nielsen has previously spoken openly with the Danish media about his cannabis sales and said he knew he might one day get arrested for it.
“It should be laboratory technicians, chemists and doctors who do it [sale cannabis products, ed.] under controlled conditions. I’m no trained expert but I have some principles and I stand by them,” he told BT.
Nielsen told the tabloid he became convinced of cannabis’s medical potential when he began taking edible marijuana products for his osteoarthritis.
When he found that the treatment worked, he wanted to give other Danes suffering from medical conditions the same options.
He says he has clients across Denmark who suffer from ailments such as cancer, sclerosis and fibromyalgia.
Admits guilt
Nielsen and his wife are now being charged under Denmark’s narcotics laws and could face up to ten years in prison.
The couple’s lawyer, Erbil Kaya, told BT that Claus Nielsen has pled guilty while his wife has denied any guilt.
The couple’s initial court appearance was held behind closed doors, despite the defence’s wish to have information about the case shared with the public.
“The public is aware of this case so there is nothing secret about it and he has spoken out about his business. There is also a documentary being made about him, so there is nothing to hide as far as he is concerned,” Kaya said.
Kaya said that his client sells cannabis to help sick people and to put pressure on the state to change its outlook on medicinal cannabis.
“Claus hasn’t hidden the fact that what he does and he knew it was illegal. That’s why he has admitted his guilt. But he hasn’t done it to make money and be a criminal mastermind. He has done it in broad daylight and been open and honest about it,” Kaya said.
88 percent support legalization
Denmark’s hard-line approach to cannabis for both medical and recreational use has been a hot topic in recent months.
The Region of Southern Denmark agreed in August to move forward on on a plan that could see the region become the first in the nation to prescribe cannabis for medicinal use, while Information newspaper reported over the summer that Health Minister Sophie Løhde is considering a four-year national trial programme.
Løhde’s Venstre government was part of a political agreement in 2014 that called for the earmarking of funding for “research projects on pain relief, including the use of medicinal cannabis”.
A Gallup poll found in June that a full 88 percent of Danes support legalizing cannabis for medical use. Polls have also shown a slim majority in favour of legalizing cannabis for recreational use, a debate that was kicked in to high gear after a shooting in Copenhagen’s Christiania district and the removal of permanent cannabis stalls in the district’s notorious Pusher Street.
Several political parties now support legalizing cannabis but the three largest parties – Venstre, Social Democrats and Danish People’s Party – remain opposed.