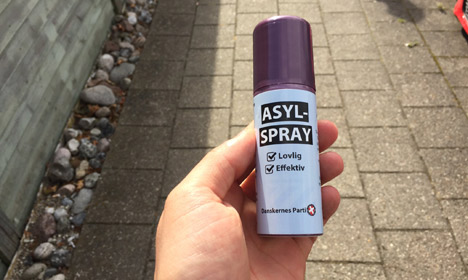 The Danes' Party's spray evoked strong feelings at home and criticism from abroad. Photo: Daniel Carlsen/ Danskernes Parti
In the southern town of Haderslev, 137 cans of relabelled hair spray were given away to the public on Saturday by the nationalist Danes' Party (Danskernes Parti), which does not hold any seats in parliament.
“The asylum spray is a concrete reaction against more Danes feeling insecure,” party leader Daniel Carlsen, a former member of a Nazi group that he now distances himself from, told AFP.
See also: Danish nationalists hand out cans of 'refugee spray'
“Some Danish girls don't dare to go outside after it gets dark, partly because there are now asylum seekers in town,” he added. The spray was described as “effective” and “legal” — in a nod to Denmark's ban on pepper spray.
In the long run the problem could only be solved by “stopping non-Western immigration and beginning comprehensive repatriation,” Carlsen said.
See also: Danish women report harassment by refugees
The United Nation's refugee agency, UNHCR, said it “strongly regrets that this kind of incident is taking place in Denmark against asylum seekers and refugees, people who already have suffered so much”.
“It is a small group that is involved in this incident and only represents a very small fraction of the Danish people,” it added in a statement.
A lawmaker for the opposition Social Liberals (Radikale), Zenia Stampe, said she would ask the government “what legal options we have to stop the spread of vigilantism”.
In a post on Facebook, she suggested that politicians would have reacted more strongly if other minority groups, such as Jewish or gay people, had been targeted in a similar stunt.
Around 22,000 people live in Haderslev, where a migrant centre currently houses around 140 asylum seekers, according to the Danish Red Cross.
See also: Meet Denmark's new anti-immigration party
Europe has faced its biggest migration crisis since World War II with well over one million refugees and migrants arriving on its shores in the past year as they flee war in Syria and the Middle East, and poverty in Africa.
Populist groups across Europe have sought to capitalise on widespread unease over the unprecedented migrant crisis, using it to boost their electoral gains.
The Danish People's Party (DF), which won 21 percent of the vote in a 2015 legislative poll and whose support the minority government needs to pass legislation, has backed a controversial decision to seize migrants' valuables and cash to help finance their stay.
DF has now seen its status as Denmark's anti-immigration party challenged by Nye Borgerlige, which recently obtained enough voter declaration signatures to qualify for the next election.
The Danes' Party is also trying to gather enough signatures to qualify for Denmark's next parliamentary elections, which some analysts think could come as early as next month.