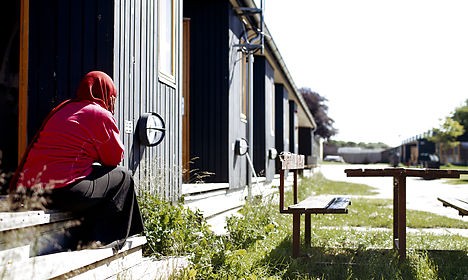 An unspecified number of married couples have been reunited in Danish asylum centres. File photo: Bax Lindhardt/Scanpix
Metroxpress reported on Wednesday that the Danish Immigration Service will now reunite several married couples who have been living separately since February.
“In some of these cases it has been it has been assessed that it would not be compatible with Denmark’s international obligations to maintain the separate living quarters, thus these couple have been offered to be housed together,” DIS wrote in an official response to a parliamentary enquiry.
See also: Denmark separates underage spouses in asylum centres
Specifically, the agency concluded that the separate living quarters would violate the UN’s Convention on the Rights of the Child and Article 8 of the European Convention on Human Rights, which guarantees the right to one's “private and family life”.
Josephine Fock, an MP for The Alternative who raised the issue with DIS, cheered the reversal.
“It is completely outrageous. We are talking about people who have fled to Denmark who are being split from each other. Some of them have children together and investigating individual [asylum] cases takes an unbelievably long time,” Fock told Metroxpress.
In January, the Integration Ministry obtained an overview of the Danish asylum system that revealed that there are currently 27 minors who have spouses or partners. According to an earlier report in Metroxpress, there are two married 14-year-old girls at Danish asylum centres. One is married to a 28-year-old man, while the other is pregnant and has a 24-year-old husband.
The newspaper later reported that two asylum seekers tried to take their own lives after being split from their spouses.
Integration Minister Inger Støjberg, who championed the separations, did not immediately respond to the policy reversal but spokesmen for both the Danish People’s Party and the Conservatives told Metroxpress that Denmark should either directly challenge or withdraw from the international conventions.