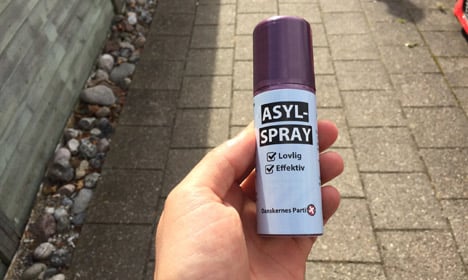 The party said it distributed more than 100 cans of its 'refugee spray'. Photo: Daniel Carlsen/ Danskernes Parti
The party, which was founded by a former Neo-Nazi and wants to see all non-Western immigrants kicked out of Denmark, put labels on cans of hair spray reading ‘Refugee Spray: Legal [and] effective’.
The party’s chairman, Daniel Carlsen, said the spray is a necessary legal alternative to pepper spray, which is illegal in Denmark.
See also: Danish teen fought off attacker – now she'll face fine
He said that Haderslev was the perfect location to hand out the cans, given the reports of local women being harassed by refugees and asylum seekers.
“I don’t think it is provocative. We are tackling an actual problem in our society, where many Danes feel unsafe. Partially because there are so many migrants in the country and partly because one isn’t allowed to defend one’s self,” he told TV Syd.
The cans of ‘refugee spray’ brought out strong feelings.
One woman interviewed by TV Syd said she “can’t even find the words to describe how outraged” she was by the spray.
“I think it is disgusting. I’m simply so offended,” local resident Helle Byg said.
Another woman, Charlotte Bech, was overcome by emotion and gave a tearful interview to the TV station.
“They've been through so much and then they're told that they are so undesirable that we had to make a spray to use on them. One thing is the opinion that we don’t have the capacity [for refugees] or an opinion that some of them might not fit in to our culture. But to make a joke out of it is not okay,” Charlotte Bech of Silkeborg said.
Others were happy to accept the spray cans.
“It’s great. It matches bloody well with my attitudes and opinions. It is after all them [refugees] who we are protecting ourselves against at the moment,” Diana Nielsen told TV Syd.
Carlsen said in a video posted to Twitter that 137 people took the spray and that the party plans to distribute them again next week.

The nationalist Danes’ Party is no stranger to controversy.
Earlier this year it was behind an advertising campaign featuring the white silhouettes of playing children with the slogan “Your children deserve a Danish Denmark.”
A few months later, it tried to piggyback on the popularity of the Icelandic football team by posting a racist image to Facebook insinuating that France’s national team should not be allowed in the Euro 2016 tournament because of the African heritage of its players.
The Football Association of Iceland released a statement slamming the ad, which cautioned that “Europe and Denmark [will] be transformed into an African backyard”.
The party is currently trying to gather the 20,000 verified signatures necessary to qualify for the next parliamentary election.