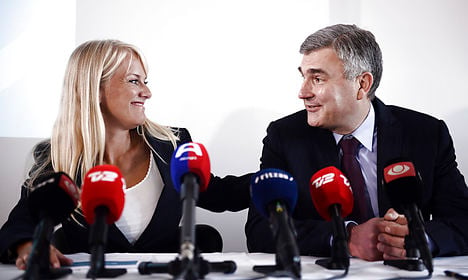 Nye Borgerlige's Pernille Vermund and Peter Seier Christensen held a press conference on Thursday after qualifying for the next election. Photo: Olafur Steinar Gestsson/Scanpix 2016)
The party Nye Borgerlige, which roughly translates to ‘The New Right’ (a spokesperson told The Local that it did not have an official English name), has surpassed the 20,000 signatures needed to qualify for the next election.
The party’s core issues are tougher immigration rules, lower taxes and a withdrawal from the European Union and international conventions.
Here is a look at where the party stands in those areas, according to its policy agenda.
No asylum and immigration only for those who have a job
Nye Borgerlige wants to stop the acceptance of all refugees except for those brought into the country through the UNHCR resettlement problem.
It also wants to limit Danish citizenship to “people who contribute positively and have shown the will and ability to assimilate” and suggests setting an annual limit on the number of people who can become Danes through naturalization.
The party also suggests limiting immigration to only those who “come with a job in hand” and wants to set different salary requirements on immigrants based on their home countries.
Nye Borgerlige also says Denmark should be able to annul the citizenship of anyone convicted of terror or treasonous acts and more easily kick foreigners out of the country if they have broken the law.
“Values like our freedom of expression, freedom of religion and our right to assemble are under pressure,” Nye Borgerlige writes in its party platform. “Therefore there is an increasing need to protect the culture and values that give Danes the freedom to choose how we want to live our lives.”
In an interview with TV2 earlier in the year, party chairwoman Pernille Vermund warned that “desperation” due to the growing tensions over immigration could lead to a “civil war” in Denmark.
“If we lose respect for our legal system, it will create conflict and unrest – in the worst case, a civil war. When you look at France, one can worry about how it will end,” she said, in reference to a number of arson and graffiti attacks on Danish asylum centres in late 2015.
Vermund told TV2 on Wednesday that even though Denmark already has the strongly anti-immigration Danish People’s Party (DF), she sees a place in the political landscape for Nye Borgerlige.
“The Danish People’s Party are social democrats when it comes to economic policies. So there are major differences in what our parties want. While they see the Social Democrats as partners, we clearly belong in the blue bloc [Denmark’s right-of-centre parties, ed.],” she said.
Out of the EU
Nye Borgelige views the EU as “monstrosity of rules and laws” that is “a direct threat to Denmark’s prosperity, progress and democracy”.
“We are ready to withdraw Denmark out of the EU and seek a looser connection in line with Switzerland if a satisfactory agreement for Denmark cannot be achieved,” the party writes.
It also wants Denmark to pull out of a number of international agreements including the UN’s convention on stateless individuals and the UN Refugee Convention.
Lower taxes
On the economic front, the party supports “lower taxes” and “more financial freedom for Danes”.
“We believe that money is best placed in Danes’ pockets. We will therefore limit the number of tasks that the public system carries out and reduce redistribution and bureaucracy,” the party programme states. “That will reduce the tax burden and create financial freedom for individual families to choose for themselves how they want to live.”
It may not take long to find out if “Denmark needs Nye Borgerlige”, as the party writes in its programme. Rumours of a coming election have grown increasingly louder as the support parties of the Venstre government have been engaged in bickering and ultimatums that have only intensified since PM Lars Løkke Rasmussen unveiled his so-called 2025 plan last month.
Some analysts believe that the fundamental disagreements between support parties LA and DF could force an election as early as next month.