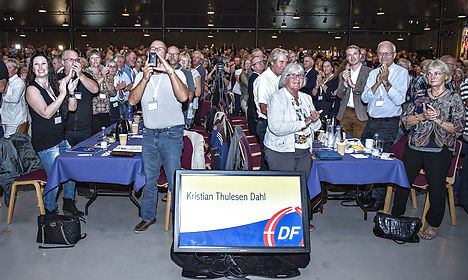 DF members applaud party leader Kristian Thuelsen Dahl's speech at the party's national meeting over the weekend. Photo: Henning Bagger / Scanpix
Speaking at DF’s national meeting in Herning over the weekend, Cheanne Nielsen delivered remarks that have been widely criticised by her political opponents.
Nielsen, a delegate from Copenhagen, lashed out at immigrants and what she perceived as a lacklustre effort from the government – which has rolled out one set of immigration restrictions after another – to sufficiently limit the number of foreigners living in Denmark.
“Why should foreigners take care of themselves, now that they can require rent and pocket money from the state as soon as they come here?” Nielsen wondered.
“They make a mess, they cheat, they steal, they rape and they kill,” she added.
While the DF crowd ate up the comments and greeted the gross generalization with applause, Nielsen’s remarks were widely criticized by members of Denmark’s other political parties and were given a slight reprimand by DF leader Kristian Thuelsen Dahl, who said Nielsen “went too far” but declined to strip her of her party membership.
Roskilde resident Mille Stockner viewed Nielsen’s comments as a clear violation of Denmark’s racism law and started a petition to report her to the police. Over 6,000 people added their names and on Tuesday, Stockner filed an official complaint with the West Zealand Police.
“In my view, these comments are such extreme generalizations of an ethnic group that they are a clearly in violation of Paragraph 266b [the so-called ‘racism paragraph’, ed.]. This is also a case of using such comments as propaganda when they are expressed from the podium of a large national gathering,” Stockner wrote in the petition.
Nielsen attempted to walk back her comments in a Facebook post written on Tuesday.
“At the national meeting, I gave a speech. Unfortunately, I said ‘foreigners’ and not ‘MANY foreigners’. This has been interpreted to mean that I think ALL foreigners [cheat, steal, rape and kill, ed.]. It goes without saying that there aren’t problems with ALL foreigners. Many of them take good care of themselves and want to be a part of Danish society. But there are problems with many foreigners and we should be able to talk about it,” she wrote.
Nielsen’s comments weren’t the only ones to garner headlines from the DF national meeting.
Marlene Harpsøe, who represents the party in parliament, also received a fair amount of criticism for her suggestion on how Denmark should handle rejected asylum seekers.
“There are often reports of difficulties in sending rejected asylum seekers back home. It is very, very expensive when the trip is made by plane. We waste an incredible amount of police resources on it. So, dear gathering, I have a much better idea. Give the migrants a pair of sneakers. If they can walk all the way up here, they can also walk home again,” Harpsøe said to rapturous applause.