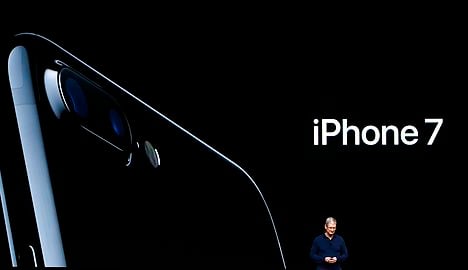 Somehow, we don't think that the scene in Viborg is what Tim Cook was hoping for. Photo: Josh Edelson/Scanpix
That was once again true with the launch of the latest model, the iPhone 7. The availability of the new phone was accompanied by breathless press coverage and endless photo galleries of happy consumers clutching their new gadget.
But the enthusiasm did not make its way to Viborg.
A clip that has been circulating across the internet for the past few days treats viewers to what only can be described as the world’s most pathetic iPhone launch. At the 3 store in Viborg, just two shoppers turned up to get the new phone.
But that doesn’t stop the 3 employee from firing off a confetti canon and welcoming the town’s only two Apple fanboys, who then shuffle in looking somewhat embarrassed over the hullabaloo.
Originally posted by TV MIDTVEST, the video has quickly spread across Facebook. A repost from the page ‘The LAD Bible’ had nearly six million views as of Monday morning.
A spokeswoman for 3 said that she understands why the clip has been so popular.
“We can definitely see the humour in it. When you see that clip, you can’t help but to smile,” Rikke Juul Hansen told TV2.
She said that the mobile company had balloons and confetti at all of its 28 stores in Denmark for Friday’s launch.
“But we had definitely expected more people to show up in Viborg,” she said.