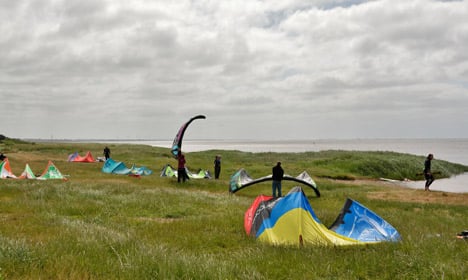 Kite surfers prepare to hit the water at Ringkøbing Fjord. Photo: Colourbox
At this point, it hardly bears repeating that Danes are the happiest people in the world. It’s a title they’ve earned in one international survey after another for decades now, but are all Danes equally happy?
See also: Danes regain 'world's happiest people' title
That’s what Statistics Denmark set out to discover in a nation-wide study released this week. The statistics bureau asked 42,500 Danes from across the country to rate their life satisfaction on a scale from zero to ten.
What it found is that the happiest Danes are those who live outside of the biggest metropolitan areas. In fact, despite just being named the world’s most livable city, Copenhagen is actually home to the least satisfied Danes of all.
See also: Copenhagen is world's best city to live in: magazine
According to the survey, the nationwide average for life satisfaction was 7.5 on the ten-point scale. The average score in Copenhagen was 7.4, making Denmark’s bustling capital the only municipality of the 38 included in the study to be below the average.
So, just where do the happiest people amongst the world’s happiest people live? In the western Jutland municipality of Ringkøbing-Skjern apparently, where residents reported the highest levels of life satisfaction, at 7.9.
Ringkøbing-Skjern’s mayor was naturally quite satisfied with the results.
“It makes me incredibly proud of our area and of the extensive work carried out everyday to make the municipality something very special,” Iver Enevoldsen said in a press release.
“The survey confirmed what we want all of Denmark to know: it is really good to live in Ringkøbing-Skjern Municipality,” he added.
In a perhaps less surprising result, Statistics Denmark’s survey on life satisfaction also found that while money may not be able to buy happiness, it certainly seems to help. Amongst Danes with an annual income of 600,000 kroner or more, a full 78 percent reported a high level of life satisfaction. That number fell down to 61 percent for those with an annual income of 200,000 kroner or less.
The full life satisfaction survey results can be perused below, in Danish.