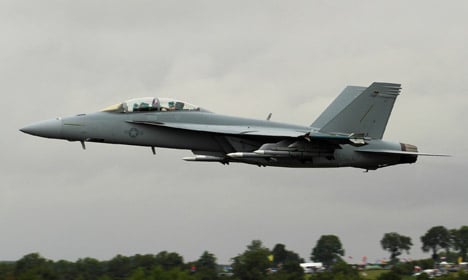 Boeing said Denmark "inaccurately assessed the cost and capability of the F/A-18 Super Hornet", pictured here. Photo: Airwolfhound/Flickr
In June, Denmark decided to replace its ageing fleet of F-16s with 27 US-built Lockheed Martin F-35A Lightning II fighters in a deal valued at 20 billion kroner (€2.69 billion, $3.02 billion).
See also: Denmark picks F-35 in historic jet purchase
Boeing's F/A-18E/F Super Hornet and Eurofighter's Typhoon model were also in the running for the order, which had been debated for over 10 years.
“We believe the ministry's evaluation of the competitors was fundamentally flawed and inaccurately assessed the cost and capability of the F/A-18 Super Hornet,” Debbie Rub, a Boeing vice president, said in a statement.
The company had submitted a request for the defence ministry to provide “all materials related to the fighter procurement evaluation and decision announced in June,” it said.
“We're taking this step because there's too much at stake for Denmark and, potentially, other countries considering the Super Hornet,” Rub said.
She described it as “the first step toward bringing a formal legal challenge.”
Boeing said it had voiced concern earlier this year over the Danish evaluation process, in particular with a government estimate that “the Super Hornet would cost up to twice as much as detailed in US Department of Defense budget documents.”
Danish Defence Minister Peter Christensen said it was “natural” that only the company behind the winning bid would be happy with the outcome of the process.
“I note that we have had a very thorough and transparent process,” he told Danish news agency Ritzau.
Denmark is one of nine partner countries, that also include Britain, Canada and Turkey, who are helping pay for the futuristic F-35A fighter jet's development.
The country expects to take delivery of the F-35s between 2021 and 2026.