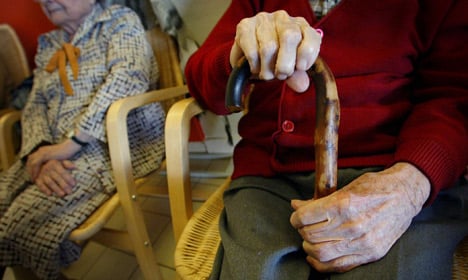 Only three EU countries allow legal euthanasia. Photo: Colourbox
Mogens Arlund said his wife begged him to help her end her life. Left paralyzed after a fall, Vibeke Arlund no longer wanted to live. Due to her immobilization, she could not end her life by herself and asked her husband to help.
“She din’t just insist on it, she begged me to do it. And she had done that since she fell on February 3rd,” Mogens Arlund told TV2 Lorry.
On April 9th, he helped his wife record a message stating that she wanted to die and then he fulfilled her wish by giving her 20 sleeping pills. He lay down beside her as her life slipped away.
Last week, Arlund was convicted of “death upon request” and was given a 50-day suspended jail sentence. Despite having broken the law, he said he has no regrets.
“The only thing that functioned was her head and she begged me to free her from the prison she was stuck in,” he said in a tearful court testimony, as quoted by BT.
“The woman whom I had been married to for over 50 years – I love her and I miss her terribly. I had to do it,” he added.
Arlund said that he was forced to take action because “there is a flaw in Danish society” that doesn’t allow for sick people to die on their own terms.
“It shouldn’t be that one is forced to do what I have done,” he told TV2 Lorry.
The vast majority of Danes agree. In an opinion poll conducted for TV2, a full 79 percent of respondents said that Danish law should allow for active euthanasia. Half of all respondents said that they would be likely to help a seriously ill loved one end their life.
Although the poll was conducted as Arlund’s story made national news, its results were not an unusual. Previous polls have put support for active euthanasia at around 70 percent.
A majority of parliament and the Danish Ethics Council, however, are against changing Danish law to make active euthanasia legal.
The association En Værdig Død (A Dignified Death), which supports active euthanasia, said Arlund’s case highlights the need for a law change.
“This case shows once again that there is a group of people for who palliative care is no longer an alternative. The want it to end; they can’t take it any more. These people should be heard, they should be respected and they should have the ability to end their lives,” the association’s chairman, Flemming Schollaart, told TV2.
His group currently offers guidance to Danes who are interested in going to Switzerland, where assisted suicide has been legal since 1942. There, foreign nationals can legally end their lives, but upwards of 100,000 kroner costs mean that it is not an option for many.
See also: Twice as many 'suicide tourists' go to Switzerland
Schollaart wants Denmark to follow the lead of the Netherlands, which has allowed Dutch residents to receive legal euthanasia since 2002.
“We should follow the Dutch model, plain and simple. They have had a controlled system for many years and it has now downside,” he said.
There are currently only three EU countries that allow active euthanasia: the Netherlands, Belgium and Luxembourg. Assisted suicide is legal in a handful of US states and Canada passed a law over the summer that allows for physician-assisted death under certain criteria.

PARTNER CONTENT
European healthcare: how does your country rank?
Url copied to clipboard!