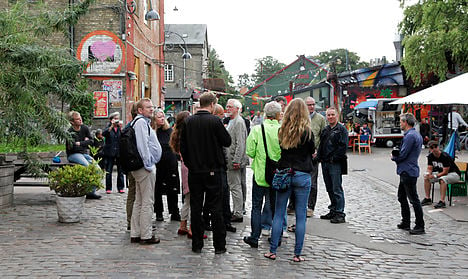 A police handout photo from a 'security walk' through Pusher Street earlier this month. Photo: Københavns Politi/Scanpix
After Christiania residents cleared its notorious open-air cannabis market Pusher Street following the shooting of two police officers and one civilian, they now say they are open to further cooperation with Copenhagen Police.
Police on Thursday released a copy of a letter sent to the Christiania Fund, the fund established by residents in 2011 to formally purchase their land and properties from the state, laying out four recommendations to stop the re-emergence of Pusher Street.
The recommendations include removing large stones at Christiania’s entrances to allow “unhindered” police access, the installation of additional lighting in Pusher Street, a temporary ban on taxi access to the enclave and temporary video surveillance along Pusher Street.
A Christiania spokeswoman said on Thursday that residents are willing to go along with the police suggestions.
“We are doing it because it is a requirement from the police and because of this terrible incident in which two police officers were shot,” spokeswoman Hulda Mader told broadcaster DR.
Copenhagen Police director Thorkild Fogde said the residents’ acceptance of the conditions marks a “turning point” in the alternative enclave’s 45-year history.
“We are pleased and satisfied that Christianites are willing to cooperate with police after the tragic episodes. This is a landmark declaration,” he told DR.
Fogde said the video surveillance would be essential in keeping the cannabis trade out of Christiania. Although the permanent stalls have been torn down, hash and marijuana are still be sold along Pusher Street.
“It [clearing Pusher Street, ed.] has happened before, both by the police and Christianites themselves. But the cannabis trade has returned. We know that the stalls themselves won’t do it alone. Sellers and buyers need to stay away. And video is an excellent solution for that,” he said.
Although Fogde said that video surveillance would be temporary, he offered no timeline.
“We will keep watch for as long as it’s needed,” he said at a Thursday press conference.
One of the police officers in the August 31st Christiania shooting remains in critical condition while the other two men escaped serious injury. 25-year-old Mesa Hodzic, the presumed gunman, was shot by police during his arrest and subsequently died from his wounds.
Copenhagen Police said on Tuesday that officers had arrested the man they believe operated the cannabis stall where Hodzic worked.