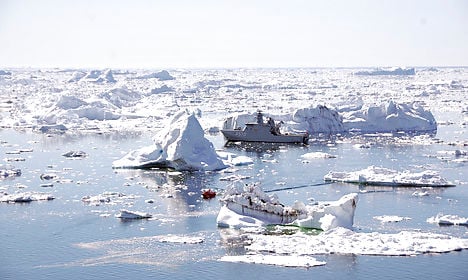 The seasonal melting of Greenland ice sheet began 'disturbing early' this year. Photo: Christian Brøndum/Scanpix
“These new results give us new and robust evidence of the tendency of warmer temperatures in the Arctic continuing,” John Cappelen, a climatologist at the institute, said in a statement.
The average summer temperature was 8.2C (46.8F) in Tasiilaq on Greenland's southeast coast, the highest since records began in 1895 and 2.3C above the average between 1981 and 2010.
New highs were also recorded in the south and in the northeast this summer, after a balmy spring that broke records at six out of 14 weather stations in the territory.
In April, DMI said that the seasonal melting of Greenland's vast ice sheet had reached record levels, prompting it to check that its “models were still working properly.”
Speaking to the Associate Press at the time, Peter Langen of DMI said the early seasonal ice melt was “disturbing”.
Something like this wipes out all kinds of records, you can't help but go this could be a sign of things we're going to see more often in the future,” he said.
Around 12 percent of the ice sheet was found to be melting almost one month earlier than the previous top three dates for when more than 10 percent of the ice had begun to melt, it said.
The Greenland ice sheet, a potentially massive contributor to rising sea levels, lost mass twice as fast between 2003 and 2010 as during the entire 20th century, researchers said in December.