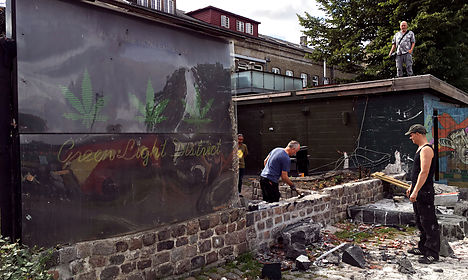 The man arrested is suspecting of operating one of Christiania's now-demolished cannabis stalls. Photo: STAFF/Scanpix
The man is not suspected of being involved in the shooting but is rather a key figure in the police investigation into presumed shooter Mesa Hodzic’s connections to Christiania’s cannabis market.
“We are talking about the man whom we believe is responsible for the [cannabis] stall to which the perpetrator in the shooting case was connected,” police spokesman Dannie Rise told Ritzau.
See also: Christiania residents shut down Pusher Street
The 40-year-old was expected to make a preliminary court appearance on drug charges on Tuesday afternoon. Prosecutors are expected to request that the court appearance be closed to the public and media.
According to Ritzau, the man was previously arrested as part of a massive March 2014 police raid described as the biggest Christiania bust ever. A total of 76 people were sentenced to a combined 187 years in prison but the man in question had appealed against his conviction.
One of the police officers in the August 31st Christiania shooting remains in critical condition while the other two men escaped serious injury.
Hodzic, the presumed gunman was shot by police during his arrest and subsequently died from his wounds. The Amaq news outlet, which has close ties to the Islamic State, tried to claim that Hodzic was a “soldier” of the terrorist group but both Copenhagen Police and the terrorist monitoring organization SITE Intelligence Group have said there is no credence to the claims.
The shooting in Christiania led to the historic decision to shut down the alternative enclave’s open-air cannabis market known as Pusher Street. Residents cleared the cannabis stalls on September 2nd but there have been reports that cannabis sales are still taking place in Christiania and the surrounding area and have spread to other parts of Copenhagen.