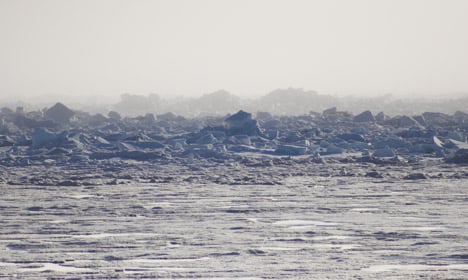 Denmark said "there is no reason" to talk to the Russians about the conflicting claims. Photo: gburba/Iris/Scanpix
The Russian minister of natural resources, Sergey Donskoy, recommended to President Vladimir Putin last week that Russia should speak directly to Danish officials about overlapping submissions to the UN Commission on the Limits of the Continental Shelf (CLCS) both nations presented last month.
Donskoy wants to “speed up” the process by addressing the 550,000 square kilometre overlap directly with Denmark.
“In order to speed up the handling of the Russian bid, it will be helpful to hold bilateral consultations with the Danish side on the issue of signing a deal on a preliminary delimitation of the adjacent parts of the continental shelf in the Arctic Ocean,” Donskoy told Putin according to the report, adding that it would be “desirable” to have the talks in the coming months.
See also: Russia eyes Arctic deal with Denmark
But Jensen made it clear that there will be no direct talks and that Denmark is content to let the CLCS have the final word.
“Until we know which territorial claims are recognized, there is no reason to start any negotiations,” the Danish foreign minister told Politiken.
A Russian military and Arctic affairs expert at the Peace Research Institute Oslo (PRIO) said Jensen’s refusal to discuss the claims with Russia is significant.
“It indicates that Denmark feels very certain that it has a good case with the UN commission,” Pavel Bajev told Politiken.
Denmark has made three claims on areas off the coast of Greenland that total over one million square kilometres and was the first country in the world to attempt to claim outright ownership of the North Pole.
Russia’s bid covers a 1.3 million square kilometre area and also includes the North Pole. It first made an official submission of its claims in 2001 but was told by the CLCS that additional research was needed.
According to Politiken, many Arctic analysts predict that the CLCS will end up declaring that both Denmark and Russia have legitimate claims and thus force the two countries to negotiate.
Canada has also said it will try to extend its territorial claims in the Arctic to include the North Pole, although it hasn't yet fully mapped its claim.
Norway is the only one of the five Arctic nations to have had its claims over part of the Arctic Ocean approved by the UN, but unlike the others it has made no claim over the Pole itself.
Denmark and Greenland's joint claim. Image: Danish Foreign Ministry