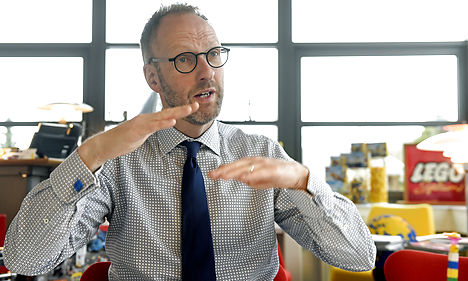 Lego CEO Jørgen Vig Kundstorp. Photo: Fabian Bimmer/File Photo/Scanpix
Net profit fell to 3.49 billion kroner (€469 million, $524 million), from 3.55 billion kroner in the same period last year.
Revenue growth was still in double digits at 11 percent to 15.69 billion kroner, but it increased at less than half the pace it did a year ago.
“Maintaining double-digit growth year on year through more than a decade is a testament to the never ending possibilities that children find in Lego play,” chief executive Jørgen Vig Knudstorp said in a statement.
Earnings took a hit as the group grew its workforce by 3,500 employees — meaning it now has 18,500 staff — and invested in a new factory in China and also expanded existing manufacturing plants in Mexico and Hungary.
Sales grew by double digits in the European and Asian markets but were flat in the Americas.
“We have had three years where we've had some supply challenges in the US and what we needed to do on the back half of 2015 was to slow some of our demand levels in order to ensure that we didn't have shortages… at the end of December,” chief financial officer John Goodwin told AFP.
The company was now working on marketing measures and with retailers to stimulate demand in the US market ahead of the holiday season, he added.
Among the biggest sellers were well-established lines like Lego City and Lego Star Wars, and a new product launch from this year called Lego Nexo Knights, a futuristic range that mixes medieval elements with science fiction.
Privately held Lego has outpaced the rest of the toy industry for several years, defying the rising popularity of mobile phones and tablets.
In the first half of the year, the company was the world's largest toy maker as its revenue surpassed US rivals Mattel and Hasbro, but in the past the Danish group has lost that spot during the all-important Christmas season.