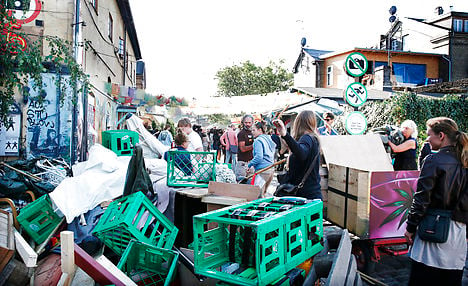 Christiania residents cleared the Pusher Street cannabis stalls on Friday. Photo: Uffe Weng/Scanpix
The decision comes after two police officers and a civilian were shot on Wednesday night in a drug bust gone awry. The suspected gunman was later shot by police while being arrested and died from his wounds early on Friday.
See also: What we know about the Christiania shooting
A spokesman for the residents told broadcaster TV2 that Christianites would “make an attempt to close Pusher Street”.
“We will take action on it today [Friday],” Risenga Manghezi said.
Shortly after 9am, the clearing of Pusher Street got underway. Video footage from broadcaster DR and newspaper Berlingske can be seen here:
Even before announcing that they would try to close the market, which reportedly generates some one billion kroner in sales each year, Christiania residents asked the wider community to stop buying cannabis on Pusher Street.
“We strongly condemn the criminality that the cannabis market entails. Christiania cannot take responsibility for housing all of Denmark’s cannabis trade,” Manghezi said in a Thursday night press statement.
“We can remove the [cannabis] stalls but we can’t ensure that they don’t come back. We need all of Denmark’s help for that. If you support Christiania, stop buying your cannabis here,” he said.
On Friday morning, Manghezi reiterated that the plans to remove the Pusher Street stalls on Friday does not necessarily mean the end of a cannabis trade that has flourished for 45 years.
“We can do something, but there are so many interests [involved] that we alone can’t ensure that cannabis sales won’t pop back up in Christiania,” he told TV2.
Christiania was established by squatters in 1971 and a liberal attitude toward soft drugs has been there from the beginning. However, a cannabis market that was once controlled by the commune’s own residents was eventually taken over by hardened criminals.
Many point to a massive police raid in 2004 as a turning point for Christiania. Politicians ordered Pusher Street dismantled, but the more hardened elements then moved in to fill the vacuum and the market was soon reestablished and larger than ever.
As recently as June, police once again cleared Pusher Street but the stalls were back up within hours. This led to a renewed debate about legalizing cannabis in order to take the money out of criminal hands, but there is currently nowhere near enough support for that idea in parliament.