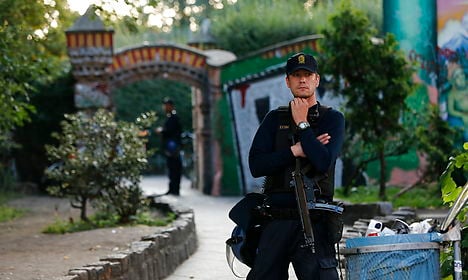 Police were still at Christiania in large numbers on Thursday morning. Photo: Jens Astrup/Scanpix
One of the officers is in critical condition, while the other two injuries are not life-threatening.
Copenhagen Police announced just after 8am on Thursday morning that the shooting suspect had been arrested at an address in Kastrup. The man was still armed at the time and was shot by officers from Copenhagen Police's Special Intervention Unit (Politiets Aktionsstyrke).
“The Special Intervention Unit surrounded the address, where an officer yelled at the man when he tried to flee from the location. The man was armed and there was a short exchange of fire and the suspect was hit,” police wrote.
Police said on Twitter that the suspect was in critical condition after being shot.

Police had earlier on Thursday morning released a photo of the man they said was was the suspect in the Christiania shooting. That photo was later withdrawn after the man was arrested.
Police said the man is a Danish citizen and described him as someone they were previously familiar with as a player in the organized cannabis market in Christiania.
The shooting incident took place during a what police called a routine action in Christiania, where officers regularly swoop in on the enclave’s illicit cannabis market known as Pusher Street.
According to police, the suspect pulled out a hidden gun and began firing while officers were making an arrest. The officer who is in critical condition was shot in the head, while the other two men were shot in the leg. The civilian is a foreign national who was reportedly collecting cans and bottles in the area when the shooting took place.
Christiania resident Simon Gabriel Laugesen posted video footage of the shooting's immediate aftermath in a Facebook post, saying that the incident “is a scenario all of us have feared the most”.
“Christiania condemns the actions. Christiania supports peace, love and diversity,” he wrote.