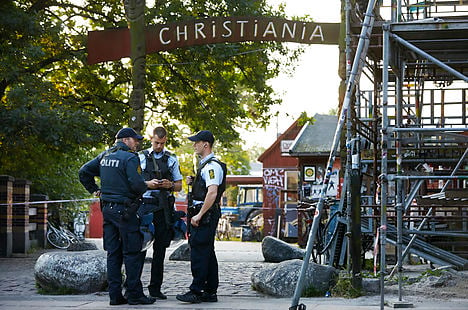 Christiania was completely closed down by police for a short period on Thursday morning. Photo: Jens Astrup/Scanpix
A shooting incident at Chrisitiania, the alternative enclave in the heart of Copenhagen, left three people injured late on Wednesday. The suspect was later arrested.
Here’s what we know about the situation:
• Police were on what they called a routine assignment at Christiania at around 11pm on Wednesday.
• Officers regularly carry out large-scale actions at Christiania’s open-air cannabis market known as Pusher Street.
See also: Christiania raid spurs new debate on legal cannabis
• In this instance, plain-clothes officers stopped a 25-year-old man on his bicycle who was suspected of carrying cash from the day’s sales.
• According to police, the man “suddenly and without warning” opened fire.
• Two officers were hit. One was shot in the head and is in critical condition. The other was shot in the leg and avoided serious injury.
• A civilian who is a foreign national was also shot in the leg. His injury is not serious.
• Thanks to tip-offs from the public, police tracked the subject to a residence in Kastrup early on Thursday.
• The 25-year-old suspect was armed when confronted by police and an exchange of fire ensued. The man was shot by Copenhagen Police's Special Intervention Unit and is in critical condition. Police evidence at the location where the man was shot by officers. Photo: Uffe Weng/Scanpix
• He has been arrested and charged with three counts of attempted murder, the illicit sale of cannabis and the illegal possession of a firearm.
• Police said that suspect is a Danish citizen of Bosnian descent.
• The 25-year-old has “ties to (militant Islamist group) Millatu Ibrahim and sympathies for IS,” but police said there is “currently no evidence” to suggest that the shooting was a result of his Islamist beliefs.
See also: Christiania shooter is Isis 'sympathizer': police
• Police said they were previously aware of the man and consider him to be an active member in Pusher Street’s organized cannabis trade.
• Police made two additional arrests in connection with the incident, including the suspect’s younger brother who was charged with selling cannabis.
• Christiania residents have called an extraordinary meeting for Thursday night to discuss the shooting and how the community should react.
• It’s estimated that cannabis sales in Pusher Street generate roughly one billion kroner per year.
• Christiania was established by squatters in 1971 and has divided public opinion ever since.
See also: Violent Christiania police action caught on video