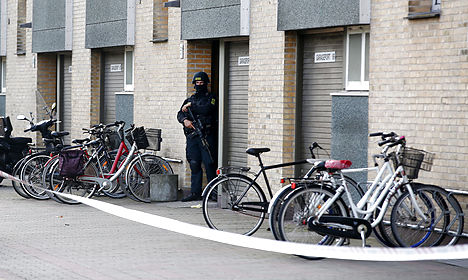 Copenhagen Police shot and injured the suspect in an exchange of fire on Thursday morning. Photo: Uffe Weng/Scanpix
“He apparently has ties to [militant Islamist group] Millatu Ibrahim and sympathies for IS,” police said in a statement, using one of the many names for the Islamic State terrorist group.
Saying the man was a Danish citizen who had come to the country from Bosnia when he was four years old, police said there was “currently no evidence that [his alleged terrorist sympathies] has influenced the shooting incidents.”
See also: What we know about the Christiania shooting
Local media named the man as Mesa Hodzic, but police did not confirm the identity.
During Wednesday's shooting in Christiania, a self-governing commune in the capital with a long history of openly selling cannabis, another police officer and a civilian were shot in the leg.
After fleeing the scene the man was arrested early Thursday in a suburban area near Copenhagen's airport. He was shot by police in an exchange of fire and is in a critical condition. The man was unable to appear in court because of gunshot injuries sustained during his arrest.
In addition to three counts of attempted murder, he faces preliminary charges of possessing a firearm and trafficking 48 kilos of cannabis, 2.7 kilos of skunk — a powerful type of marijuana — and over 1,800 joints, according to Danish news agency Ritzau.