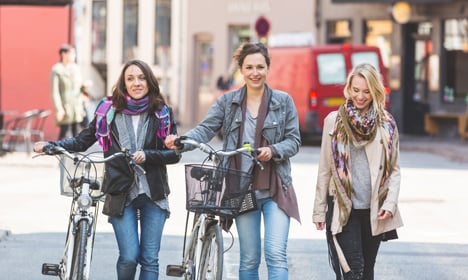 68 percent of expats in Denmark said they had difficulty making local friends. Photo: Iris/Scanpix
Although Denmark was the second best country for work-life balance and excelled in areas such as health and well being, the country was ranked just 50th out of 67 countries in the InterNations Expat Insider 2016 survey, released in full on Monday.
Denmark’s drop of eleven spots made it one of the survey’s ‘biggest losers’ and the decline was driven in large part by the difficulty of feeling at home in the nation.
“The Nordic countries make settling in hard for foreign residents, especially Denmark, which ranks 65th out of 67 in the respective category,” InterNations wrote in a press release.
The Nordic countries all ranked in the bottom ten when expatriates, which is the term used in the survey, revealed how easy they had found it to settle in, with Denmark performing the worst in 65th place, Norway in 63rd, Sweden in 62nd, and Finland in 59th place.
Denmark was dead last when it comes to the ease of making friends, 64th for being made to feel welcome and 60th for the perceived friendliness of the locals.
See also: An expat's guide to making friends with Danes
'Not looking for new friends'
According to InterNations, “an astounding 68 percent” of expats in Denmark reported difficulty in making local friends.
But there might be a logical reason for this, argued Kay Xander Mellish, an American expat and author of the book 'How to Live in Denmark'.
“Danes are very good friends, but they're most comfortable with deep, long-term friendships. They don't always see the value in short-term acquaintances, which is why they may not be up for getting to know an expat who is only going to be in the country for two to three years,” Mellish told The Local.
“And by the time Danes are in their 30s and have a career and families, their schedules are pretty full, and they're not always looking for new friends,” she added.
She advises expats to seek out Danes who grew up somewhere else and have just moved to a new part of the country.
“If you're in Copenhagen, focus on Danes that have just moved there from Jutland, or vice-versa. These Danes are far away from their usual networks and are more open to meeting new people,” she said.
Happy for whom?
The InterNations survey also found that in a country routinely ranked as ‘the happiest in the world’, many foreigners clearly feel that the famous Danish happiness applies only to the natives. Denmark was ranked 54th out of the 67 countries when it comes to expats’ ability to find personal happiness.
See also: Danes regain 'world's happiest people' title
While Denmark’s second-place ranking in work-life balance was enough to make it the 11th best country for foreign workers, a much different picture was painted when it comes to expats’ family lives.
“Denmark has been falling down the rankings quite steadily since the first Expat Insider survey in 2014 when it came second [in the survey's Family Life Index, ed.]. In 2015, the nation was 11th and in 2016, Denmark is 23rd out of 45 countries in the Family Life Index,” InterNations wrote.
Denmark’s ranking in the Family Life Index was in sharp contrast to its Nordic neighbours. Finland ranked first, followed by Sweden at number five and Norway at number 6. In every sub-category, Denmark was well behind its neighbouring countries (click image below for larger version). The survey by InterNations, which defines 'expats' as people who live in a different country than the one they were born in or whose nationality they have, quizzed some 14,300 people of 174 nationalities in 191 countries about various aspects of their lives. Only sample sizes of at least 50 respondents per country were used in the final report.

COVID-19
‘I’m going crazy’: Why international residents in Europe will travel this summer despite Covid

TRAVEL
SURVEY: Are you planning to travel abroad this summer despite the pandemic?
Url copied to clipboard!