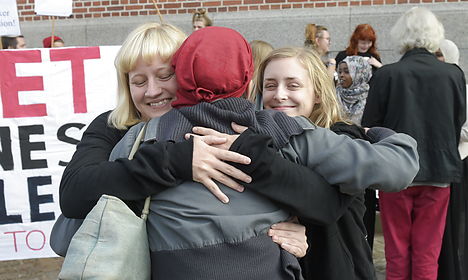 Maria Sloth (right) and Anne Hegelund hug a supporter before their court appearance earlier this month. Photo: Axel Schutt/Scanpix
City councilwoman Maria Sloth of the leftist Red-Green Alliance (Enhedslisten), and her roommate, parliamentary hopeful Anne Hegelund, opened their door to the two men in September 2015, as Denmark experienced a wave of migrants.
The two women gave the migrants a place to sleep for the night and then bought them tickets to take a ferry to Norway the following day.
After Sloth shared her story with local newspaper Aarhus Stiftstidende, the two women were reported to the police by one of Sloth’s fellow council members, who contended that the pair had broken the law by helping people who were in Denmark illegally.
But the court ruled on Friday that “it has not been proven that the accused intentionally assisted two foreigners with illegal residence”. The court also pointed out that there was no evidence against the two women besides Sloth’s own comments to the media.
Sloth and Hegelund have previously defended their actions by saying they had merely “followed [their] conscience”.
Prior to her trial, Sloth told news agency Ritzau that she did not regret assisting the two men.
“I think it is very strange that we have a law saying you have to go to court for helping people. We never doubted that we did the right thing by letting them sleep here,” she said.
The prosecutor in the case had pushed for a 30 to 40 day detention for the two women.