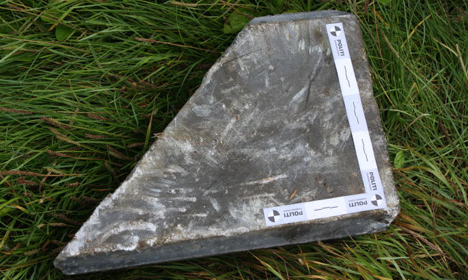 Police said that the sheer size of the stone leads them to believe that it may have been planned in advance. Photo: Fyns Politi
Funen Police said that a 30 kilo stone tile and a 9.5 kilo cobblestone were thrown from an overpass onto a moving vehicle early on Sunday morning.
The car belonged to a German family that was returning from holiday. The female passenger was killed instantly while the driver of the vehicle, a 36-year-old man, was seriously injured. The couple’s five-year-old son, who was seated next to his mother in the back seat, escaped injury.
A police spokesman told broadcaster DR that the case will be investigated as a murder and attempted murder.
“When one takes such heavy tiles and throws them down on cars moving at such high speeds, it has to be with the thought that someone could die,” Commissioner Michael Lichtenstein said.
Lichtenstein said that the sheer size of the tile leads police to believe that one or more adults were involved.
“These stones are so heavy that they’re not something you’d just come strolling with under your arm. So this is perhaps something that was planned,” he told DR.
Funen Police said that the German consulate has been called to Odense University Hospital to take care of the five-year-old child until family members arrive from Germany. Police said that they would not release more information on the German victims until family members have confirmed their identities.
Police are asking anyone who might have leads in the case to call 114. 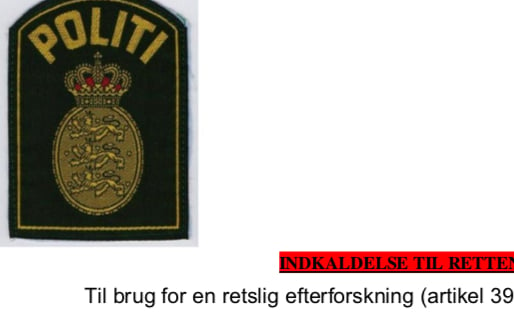 In a screenshot of one of the emails, tweeted by NSK, threats are made to send the allegations to national television stations and issue a fine of 750,000 kroner if the recipient fails to respond within 48 hours.

In another version, a fine of 75,000 euros is threatened.

Neither are addressed specifically to any individual.

Both versions of the email are full of error-strewn Danish. Examples include what appears to be auto-translated terms such as the use of “Mr.” as a form of address. Hjerteligt, literally “heartily”, is used as the sign-off instead of the normal med venlig hilsen (“with kind regards”).

One uses an address on Rue du Copenhague in Paris as the purported sender’s address of a Danish police commissioner, along with an email address that has a gmail username.

A screenshot from a scam email claiming to be from police in Denmark.

A screenshot from a scam emails claiming to be from police in Denmark.

The scam emails claim to be from Europol, a regional Danish police department or the National Police (Rigspolitiet), NSK said.

“These mails are scams! Just delete them!”, it said in the tweet.