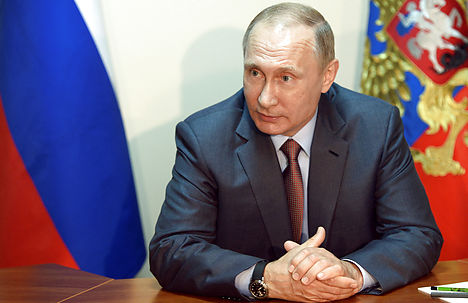 Russian President Vladimir Putin meets with Crimean officials last week in a hand-out photo from the Kremlin. Photo: Sputnik/Kremlin/Alexei Nikolsk/Scanpix
In an interview with Mandag Morgen, Krarup said that the EU is an existential threat to Denmark and is a much bigger problem than Russia.
“For Denmark? Yes, without a doubt. Just Schengen alone is a catastrophe. It’s something that will make Denmark disappear from the world map if we don’t pull ourselves together. That national borders have been disbanded is a threat against Denmark’s existence,” she told the magazine.
She went on to that although she views Russian President Vladimir Putin as “an exponent of an despotic, non-democratic system that we don’t want in Denmark”, she would welcome his help in dismantling the EU in its current form.
“I don’t want an EU like the one we have time. I want the EU buried and replaced by a forum for free trade. That’s our policy. If Putin or Marine Le Pen [France’s most powerful Eurosceptic, ed.] can help with that, that’ just fine,” she told Mandag Morgen, adding she'd also except help from “Satan himself”.
This isn’t the first time that Krarup, who is DF’s defence spokeswoman, has made controversial comments about Russia. Last month, she told broadcaster DR that Russia should be viewed as a “future ally” and accused the West of “a demonizing of Putin that has been grotesquely ridiculous and really stupid”.
Just as with her comments to DR, the Mandag Morgen interview has prompted strong reactions from her fellow Danish politicians, including the foreign affairs spokesman for ruling party Venstre.
“One can think what they want about the EU but to start calling Putin a potential ally and saying that EU is worse than Russia when it comes to Denmark’s security is probably the strangest thing I have heard in a long time,” Michael Aastrup Jensen wrote on Facebook.
DF’s fellow government support party the Conservatives also sharply criticized Krarup’s remarks.
“It’s worrisome that the Danish People’s Party’s defence spokeswoman is so fond of the biggest military threat to Denmark in the form of Mr. Putin’s Russia,” Conservative defence spokesman Rasmus Jarlov wrote on Facebook.
Peter Hummelgaard, a spokesman for the opposition Social Democrats, told TV2 News that Krarup’s comments were “deeply frightening” and accused her of having “a complete lack of memory” about Russia’s actions over the past few years.
“We’re talking about a regime that very intentionally violates Danish and Swedish air space with its war planes. A regime that threw itself into a land war in Ukraine to seize new territory and thus threatened the stability in Europe,” he said.
Denmark’s relationship with Russia has been marked by tension over the past couple of years and the intelligence agencies of Denmark, Sweden and Norway have all placed Russian aggression near the top of their respective national security challenges.
The Russians carried out two separate simulated attacks on the Danish island of Bornholm and Russian activity in and around Danish air space has included near-collisions with passenger planes.
In March 2015, Russia’s ambassador to Denmark Mikhail Vanin warned that Denmark has made itself a target of a potential nuclear attack by joining Nato’s missile defence system. Earlier this year, Vanin accused Denmark of being “hostile” and “anti-Russian” after the government said it would deploy troops to the Baltic region as part of Nato efforts to bolster its presence in eastern Europe.