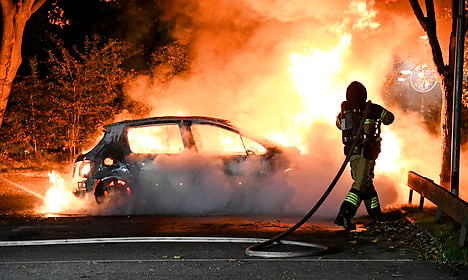 The Copenhagen incidents come after a spate of more than 70 car fires in Malmö, as pictured here. Photo: Johan Nilsson / TT/Scanpix
Police said that more than ten cars were torched in Copenhagen in the early hours of Sunday while at least seven were burnt early on Monday morning.
The early Sunday car fires were mostly in the inner city and the Amager and Christianshavn areas, while seven cars were burned on the same street in Christianshavn on Monday morning and at least one additional vehicle was torched in Valby.
The weekend fires come after at least 70 cars have been burned out in the southern Swedish city of Malmö since July. There have also been car fires in other cities across Sweden, including Stockholm, Gothenburg and Norrköping.
See also: Malmö police deploy drone to catch fire-starters
Copenhagen Police said a connection to the Swedish fires has not yet been clearly established.
“It is still too early to say anything on the extent to which this could have a connection to the fires that have happened in Sweden. But that is also irrelevant. We won’t tolerate the systematic burning of cars in the streets of Copenhagen,” police spokesman Rasmus Bernt Skovsgaard said in a press release.
Speaking to Berlingske, Skovsgaard said that Copenhagen Police are “naturally in dialogue with our Swedish colleagues”.
Police said that “appropriate measures” would be taken to ensure that the Copenhagen car fires don’t continue.
“We will keep the details of the plan to ourselves but we want help from the public. So if anyone sees anything suspicious, they should call 114,” Skovsgaard said in the press release.